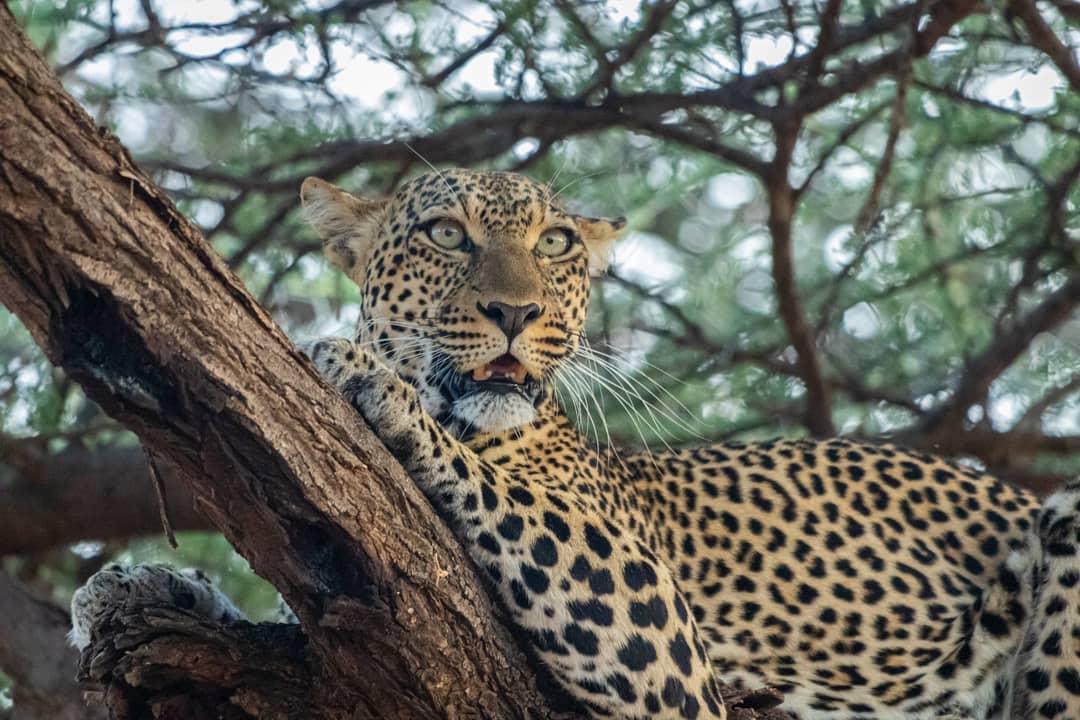 Following our epic adventures in Ol Pejeta, Mr Nomad and I felt that a visit to Samburu was in order for our friend, Richie. We love Samburu and it brings a different safari to Ol Pejeta, but usually just as amazing. The terrain is much more desert like, being semi arid and the temperature is usually much higher. The wild life is different too, with a marked absence of rhino and buffalo but with other creatures not seen at Ol Pejeta such as the Beisa Oryx and Gerenuk. The mighty Ewaso Nyiro river snaking through the county brings with it the gigantic and deadly Nile crocodiles which are always a sight to behold. 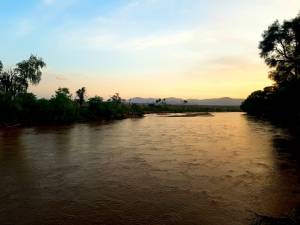 We set off to Samburu in the trusty hire car and this time, Mr Nomad allowed me to drive. I did hope however, that there would not be a repeat of the elephant incident which I endured the last time we visited Samburu. The journey through Samburu National Reserve was not as eventful as that previous occasion and we leisurely trundled through, taking in the changing landscape all the while suffering in the serious heat and humidity. There was a marked increase in the temperature between Nanyuki and Samburu and we all were feeling rather weary and bothered by the time we arrived at Samburu Game Lodge. Upon our arrival though we were made welcome as always with a refreshingly cold face towel and a glass of passion fruit juice. We were shown to our rooms and Richie’s room was already over run with the ever friendly Vervet Monkeys. As always, the monkeys were in abundance and cheekily followed us around, watching our every movement in the hope for a sneaky snack no doubt.

Once settled, we went back out into the Reserve for a quick safari before dinner. We immediately came across elephants. Mr Nomad had taken over the driving and as we crawled through the bush along the banks of the river, there were elephants every where. It seemed that every turn brought elephants. There are over 900 elephants at Samburu and it felt that we saw every elephant. As seen at Ol Pejeta, there were many baby elephants and whilst this was great to see, it made for unnerving viewing because the herds of elephants seemed to be made up only of mothers and babies and we did not want to get charged at by a protective mother. 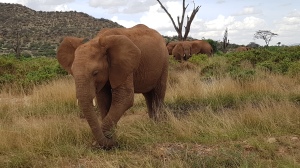 They are magnificent creatures but their sheer size makes them incredibly intimidating and somewhat dangerous. It was breath taking however to see so many elephants and the presence of so many babies can only mean that the population is thriving.

That said, we were made aware by a friendly ranger that an elephant had recently lost its life and the carcass was being feasted on by lions. This news whilst sad, brought much excitement to us all. The prospect of seeing lions was always exciting, but to see them feeding was something else. Mr Nomad untangled us from the elephant ridden bushes and we hunted out the grisly scene. We drove with the windows down as always, mainly because of the intense heat, and it wasn’t long before a very unpleasant odour wafted past us. We stumbled across the elephant carcass which stank and we were greeted by a female lion resting. We parked the car and watched as she steadily got to her feet and ambled towards the stinking carcass. We watched enthralled as she attacked the rotting flesh with ferocity.

It was only a matter of minutes when a large male lion joined her and we watched intently as they feasted together. We could not believe our eyes! Whilst it may seem macabre, we were witnessing the circle of life in action, and nature doing what nature does best – cleaning up and taking care of the environment. The deceased elephant will have been a welcome meal for many animals, not just the lions.

The lions are truly the king of the jungle and they will take first dibs, but this will no doubt have been followed by hyena who will happily devour the bones and then anything left over will have been cleaned up by the vultures. A distinct reminder that nature takes care of its own.

Upon our return to the Game Lodge for dinner, we were greeted by an enormous crocodile, chilling out on the banks of the river, awaiting his dinner. Its a real spectacle to see these ultimate predators so close, seemingly catatonic until the cow bones thrown to them by the staff at the Game Lodge come their way. A monitor lizard hung out close to the crocodiles most likely waiting for any scraps left behind.

We spent the following day back out on safari in the Reserve so we arose early and drove out before breakfast to see if we could glimpse any other predators at the site of the elephant carcass. Dawn is sometimes a good time to see such animals who are usually out and about before the heat of day sets in when they will crawl off into the bush for shade and rest. The smell of the carcass was particularly putrid that morning and we were all gagging in the car! However, our discomfort was rewarded with the fact that the male lion previously seen was once again, feasting on the deceased elephant. It was a little difficult to see him at first because he was right in the middle section of the elephant but a whistle from Mr Nomad saw him pop his head out and stare straight at us!

He did not seem impressed at having his breakfast disturbed and his menacing stare with his blood splattered nose was terrifying! We could barely breathe for fear of inviting him to get a closer look at us (not a welcome prospect). Whilst the stench of the rotting carcass was overbearing, we could not stop watching the scene before us. It was mesmerising. It was an assault on the senses – the smell of decay was strong and pungent, we could hear the flesh being torn apart, we could see the power of this brutal creature at work although none of us had any desire to attempt to touch anything that lay before us.

After observing the male lion enjoying his breakfast, we then got to see him take a drink from a puddle and move off into the bush to rest himself after gorging on this free meal. A female lion emerged out of the bush to join him and they collapsed in the bush to rest. 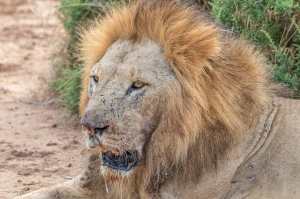 We continued with the drive and we were lucky enough to spot numerous other creatures such as the Beisa Oryx, Gerenuk, Dik Dik and even a rare Grevy’s Zebra. We once more saw hundreds of elephants and we were able to spot many giraffe. As with Ol Pejeta, we had been incredibly privileged to see so many animals and we headed back to the Game Lodge to get some pool time. We made it back to have a hearty breakfast and then spent the afternoon relaxing around the pool, regaling stories of the amazing sights we had seen. Samburu never disappointed. 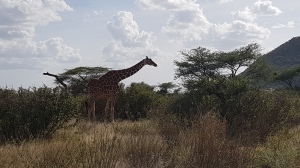 Upon having recharged ourselves by the pool, we set out into the Reserve on a final game drive before our departure the next day. We were truly amazed to see so many animals yet again.

Elephants, giraffe, dik dik, gerenuk and other creatures large and small seemed to meet us at every twist and turn. 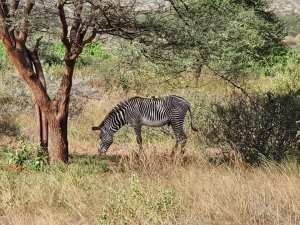 We took another drive past the elephant carcass although the lions must have had their fill as they were now nowhere to be seen. To be frank, the smell of the rotting carcass was so acrid we simply could not hang around it too much longer. The presence of hundreds of flies was also irritating. As we made our way back to the Game Lodge in awe of the animals we had seen, to our utter disbelief, we came across a leopard. She was dangling in a tree nonchalantly and although a group of cars had gathered below the tree to take in such a splendid sight, she was not at all bothered and appeased the crowds by just relaxing. We were all stunned into silence. 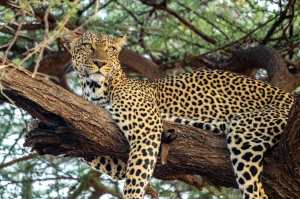 Leopards are elusive so we were pinching ourselves that we actually got to see this most majestic creature in all her glory. We silently watched for quite some time in awe of this beautiful being until she herself got bored of the crowds, gracefully descended the tree and sauntered away oblivious to the delight she had created. Richie, Mr Nomad and I were gobsmacked and needless to say, overjoyed at the sights Samburu had shared with us.

We had seen so many wondrous things it was difficult to pick out any favourite moments, from seeing the lions feeding, a sighting of a rare Grevy’s zebra, hundreds of elephants with their infants, the journey of giraffe, or indeed the splendour of the leopard. Everything that Samburu has to offer is dreamy and we were pleased that Richie had also been able to experience these amazing moments.

We set off from Samburu the following day having sharply been brought back down to earth with the news that the world had been turned upside down by Corona virus. We had been put into ‘lock down’ and with Richie’s holiday cut short, he had to make some frantic calls to see if he would be able to leave Kenya. The airport in Nairobi was shortly to close to all flights not to mention there was a question as to whether Australia would allow people to fly back in. The world had crashed whilst we were having the time of our lives. Samburu had exceeded every expectation and I have no doubt we will return in the future, but for now, the world has stopped.

Whilst the universe re-sets itself, we will take this time to be grateful for each other and our health and continue planning our next adventures….. to be continued