On 25th and 26th January 2020, Mr Nomad and I had the privilege of being able to take part in the Great Grevy’s Rally (GGR).  This was a two day photographic census to monitor the status and health of the endangered and iconic Grevy’s zebra, found only in Northern Kenya.  We were to gather photographic data to enable analysis to be carried out to assess whether the Grevy’s zebra population is stable, growing or decreasing.

Mr Nomad and I, along with a couple of work colleagues were provided with a vehicle and we travelled in convoy with other volunteers and their vehicles through the arduous terrain within Laikipia region to be accommodated in a British Army camp to enable us to participate in this census.

We were to conduct the photographic census along side conservancy managers, county officials, community members, local and international scientists with the event having three main goals: to collect information to help save the endangered Grevy’s zebra, to engage Kenyans and tourists alike in a conservation activity having tangible value to Kenyan wildlife and raise awareness of endangered species conservation and to promote adventure tourism in critical wild life areas.

There are only around 3000 Grevy’s zebra left in the wild and 90% of those are found only in Kenya.  The remaining 10% can be found in Ethiopia.  They differ in appearance from the Plains zebra (or Common zebra) in that their stripes are finer, they are taller than other zebras and are in fact, the largest and most endangered living equid, they have large rounded ears which appear extra fluffy, they have a whiter belly and their muzzle appears more brown than other zebra species.  They were named Grevy’s zebra after one was sent as a gift to the President of France, Jules Grevy, by the Abyssinian Emperor, Menelik II in 1882.  A zebra’s stripes are unique to each individual, much like a fingerprint.

Apart from their incredible beauty, their critical ecological role and their cultural importance in pastoralist communities, Grevy’s zebra are used by herders to predict rainfall, detect predators and find water through grazing during droughts.  They were hunted in the past for their beautiful skin and although hunting stopped in the late 1970’s,  the Grevy’s zebra population has never recovered.  The main threat to Grevy’s zebra today is the loss of grazing habitat due to overgrazing by livestock, competition for water, poaching and disease.  The high foal mortality is a major threat to the survival of the species.

We arrived at the camp where we were to stay for the weekend hidden within the African bush, with many other volunteers and I was pleased that not only was the tent spacious and that there was a mosquito net provided over our cot beds, there was an actual shower block.  The showers were cold, but I appreciate you can’t have everything and I considered myself lucky to have any shower at all, and functioning toilets.

The facilities were outstanding considering we were deep in the African bush, hours away from any form of civilisation.  A huge camp fire was built and we gathered around before turning in for an early night in preparation for our challenges to come. 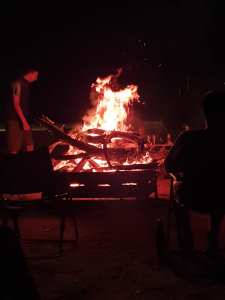 The bugs were plentiful and whilst a giant flood light had been erected, it had to be moved away because the creatures it was attracting was making most of us uncomfortable.

We were provided with GPS cameras and a map and the following day, Mr Nomad and I, and our trusty census companions, Charlotte and George jumped into the vehicle and set off to a nearby conservancy known as Ol Maisor.

Ol Maisor can be found some 2.5 hours drive from Nanyuki, along an old Rumuruti Maralel Road.  Our journey was slow going simply because the road conditions were poor, but the landscape was as stunning as everywhere else we had been previously.  It was wild and rugged and there was no tarmac anywhere in sight.

The GGR was to cover some 25,000 square kilometres spread across Laikipia, Isiolo, Samburu and Marsabit so the ground to be covered was extensive and the terrain was in the main, difficult and hostile.  Our task, as well as many other participants, was to travel through such areas taking pictures of any Grevy’s zebras that we came across.  The pictures that were taken would then be uploaded and processed using image analysis algorithms.  The algorithms work to identify each unique individual, using stripe recognition software.

All such information gathered would be analysed by scientific teams, and the visual appearance of the Grevy’s zebra with their naturally barcoded stripes, would allow scientists to estimate the size of the population within specific land units.  The pictures would also be used to determine the age and sex of each Grevy’s zebra so that estimations could be made as to the health and sustainability of the population.   Mr Nomad and I were excited to be part of such conservation efforts  so we had high hopes for the days ahead.

As soon as we set off, we spotted our first Grevy’s zebra.  He did however, set off at a fast pace so Mr Nomad hastily grabbed the GPS camera and just about managed to get a shot of him before he vanished into the bush.  I presumed the Grevy’s zebra was male because he was alone but this may not be the case – females without foals will often venture out to find grazing and water but we certainly did not get close enough to the zebra to establish its gender.  In any event, excitement was building so we continued on to Ol Maisor with much trepidation.

Ol Maisor seemed expansive with mountainous hills and rolling plains although there were two teams covering the land contained therein.  We drove through at a slow and steady pace, keeping our eyes open in our attempts to spot the elusive Grevy’s zebra.  Within the first hour of our journey, we came across a journey of giraffe.  It was an amazing sight and we stopped to take in the majesty of these creatures.  They took their time in passing us, munching on the Acacia trees, pausing on the road in front of us to check that we were no threat to them.  After this road block had cleared, we steadily continued in our quest to find the Grevy’s zebra.

We spent hours and hours trundling around the conservancy at a snail’s pace but the Grevy’s zebra remained elusive.  We failed to see any further zebra that day but we were all overjoyed to see impala, gazelle, giraffe and elephants.  The elephant sighting made up for our disappointment at failing in our mission to photograph Grevy’s zebra, as the elephant we happened across had a calf with her.

We were careful not to disturb her, particularly as there was a rather large elephant hiding in the bushes who I felt might jump out on us at any given minute.  It didn’t, (elephants can’t jump apparently) so we were able to take in the magical moment at our leisure.

We ambled back to the camp site, slightly deflated at not having seen any Grevy’s zebra on the land that we were covering, but spirits were bouyed by the abundance of other wild life that we had witnessed.  After all, we were actively assisting in conservation efforts and still having the time of our lives!

The second day of the Rally was much the same, except that we did not see a single Grevy’s zebra.  Again, although we were disappointed in what felt like a failure, the information would still be vitally important to monitor the Grevy’s zebra population, their habits and movements.  We were in any event, all thrilled to see other wild life including more elephants, giraffe, impala, gazelle and lots of camels.  We got extremely close to a herd of elephants quite deep in the bush and we watched transfixed for some time before leaving them to their day.

We were also thrilled to come across one of the anti poaching dogs, a big bloodhound called Trump, out and about with his handler, no doubt monitoring the nearby elephants.  The dog handler was acccompanied by a ranger who explained that he suspected that there was an unidentified person in the area so they had come out to keep a close eye on activity within the area.  Trump was very friendly and obliged us with a photograph whilst covering us all in slobber. 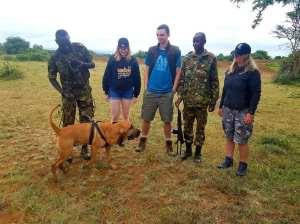 It was good to see a working dog in action though, and reassuring that the work to protect the wild life never stops.  It breaks my heart that such work has to be done at all but at least the measures taken to prevent poaching seem to be successful for now.

Although our team had taken only one photograph of only one Grevy’s zebra, we had all had a wonderful weekend made all the more worthwhile in the knowledge that we had done our bit to help with conservation efforts going on across Kenya to save an endangered species.  All and any contributions were to go directly towards protecting a species.  It was humbling to know that many people and numerous organisations were coming together to work towards a brighter future for the Grevy’s zebra.  Long may it continue!