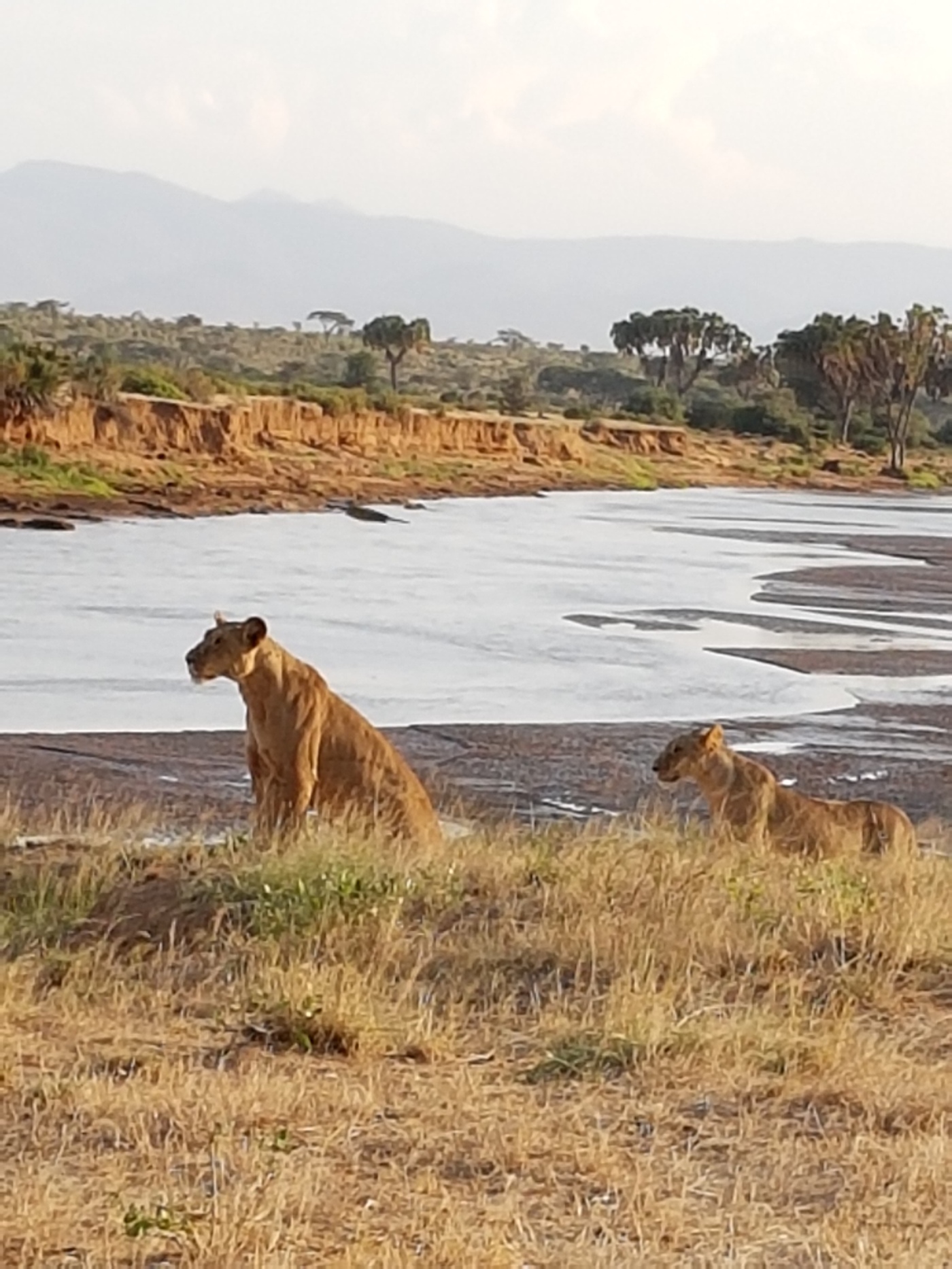 Following our stay at Samburu Game Lodge back in May 2019, we enjoyed it so much we re-visited.  We travelled to Samburu National Reserve by car which took approximately 3 hours and this time, we were accompanied by Grandma Nomad and Grandpa Nomad who had flown over from England to investigate what Kenya has to offer.  They were not to be disappointed.

We arrived at Samburu Game Lodge after the leisurely drive to be greeted once more by the ever efficient staff who did not fail to impress with their warm welcome of a refreshing glass of passion fruit juice and a warm face towel doused with eucalyptus.  We were delighted to find out that we were to stay in exactly the same river side lodge as where we had previously stayed.  The lodge is to be found on the banks of the mighty Ewaso Nyiro river which snakes through Samburu County and allows Samburu to be teaming with wild life, including the deadly Nile crocodiles.  Sitting on the balcony felt serene and peaceful, save for the chatter of the Vervet monkeys who frequented the area.

The Nomadic grandparents were delighted when they were visited by the monkeys on their balcony in their adjoining lodge!

After settling in to our lodges, we ventured out into the reserve for a quick game drive before dinner and we came across a black backed jackal enjoying a supper of what could have been an Oryx.

We saw many other animals such as the Grevy’s Zebra, Gerenuk, giraffe, Oryx, waterbuck, impala, gazelle, monkeys galore and elephants to name some of the many animals that are ever present.

We were also able to see an abundance of bird life including vulterine Guinea fowl and huge vultures occupying a giant tree.  Apparently a group of vultures is called a kettle, but if it is a group of vultures feeding, they are called a wake.  This tree became known to us as Vulture Tree and was what we looked out for to get our bearings in the vastness of the reserve.

The following days at Samburu Game Lodge were wonderfully relaxing with time around the pool, day dreaming on the balcony overlooking the river and interspersed with game drives out into the reserve.  Most evenings before dinner could be spent admiring the massive crocodiles that came in from the river and were fed by the staff in the Game Lodge.  There were a couple of nights when the crocodiles failed to materialise although we assumed that this was because they had been adequately fed already. 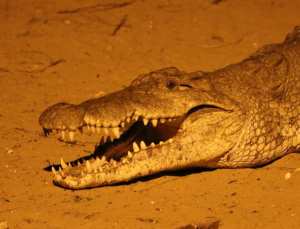 One evening, when retiring for the night, the ranger who walked us to our lodge in the darkness said that they had had trouble with an elephant barging its way into the grounds of the game lodge and whilst we did not see it, we saw the hefty iron gates hanging off their hinges the next day!  All incredibly amusing to us!  (save for the staff who had to deal with the errant elephant and the trail of destruction).

We were still attempting to find the ever elusive leopard and our patience paid off one early morning before breakfast.

We happened upon the most majestic looking leopard sat nonchalantly on some rocks and to our surprise, the leopard was accompanied by her cub!  We were spell bound! Not only were we privileged to see the leopard, but to see her cub too was jaw dropping.  They played together, gambolling around the rocks and in the bush as the African sun rose without a care in the world.  We couldn’t believe our luck!

During our time at Samburu Game Lodge, we were also enthralled by the lions.  We spotted four lionesses lazing around under a bush, not at all phased by our presence and in fact, refusing to entertain us and continuing in their slumber!  One evening, we utilised the services of a ranger who came out with us on our drive round and he obliged us by finding another group of lions which included four lionesses and a big male. 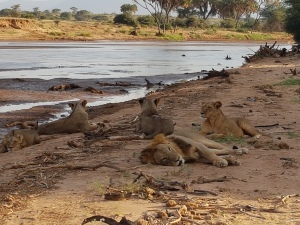 They were found on the banks of the river and we watched them silently until they all moved off, meandering through the bush no doubt in search of their next meal.

On our final day at the game lodge and in fact, as we were leaving the reserve, we witnessed a huge black maned male lion wandering along, alone in his solitary thoughts until he slumped under a bush for his day of napping.  We had been truly lucky with what we had witnessed at Samburu Game Lodge, yet another magical trip to remember. 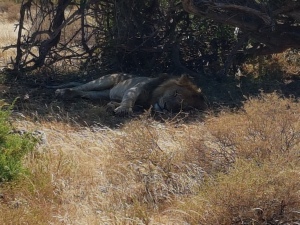 Our final night at Samburu Game Lodge had been spent enjoying a bush dinner.  The staff at the Game Lodge had spent some considerable time and effort setting up a dining area in the dense bush where we enjoyed supper under the stars.  It really was a memorable trip, one never to be forgotten.  I have no doubt at all that we will be returning to Samburu Game Lodge in the future.