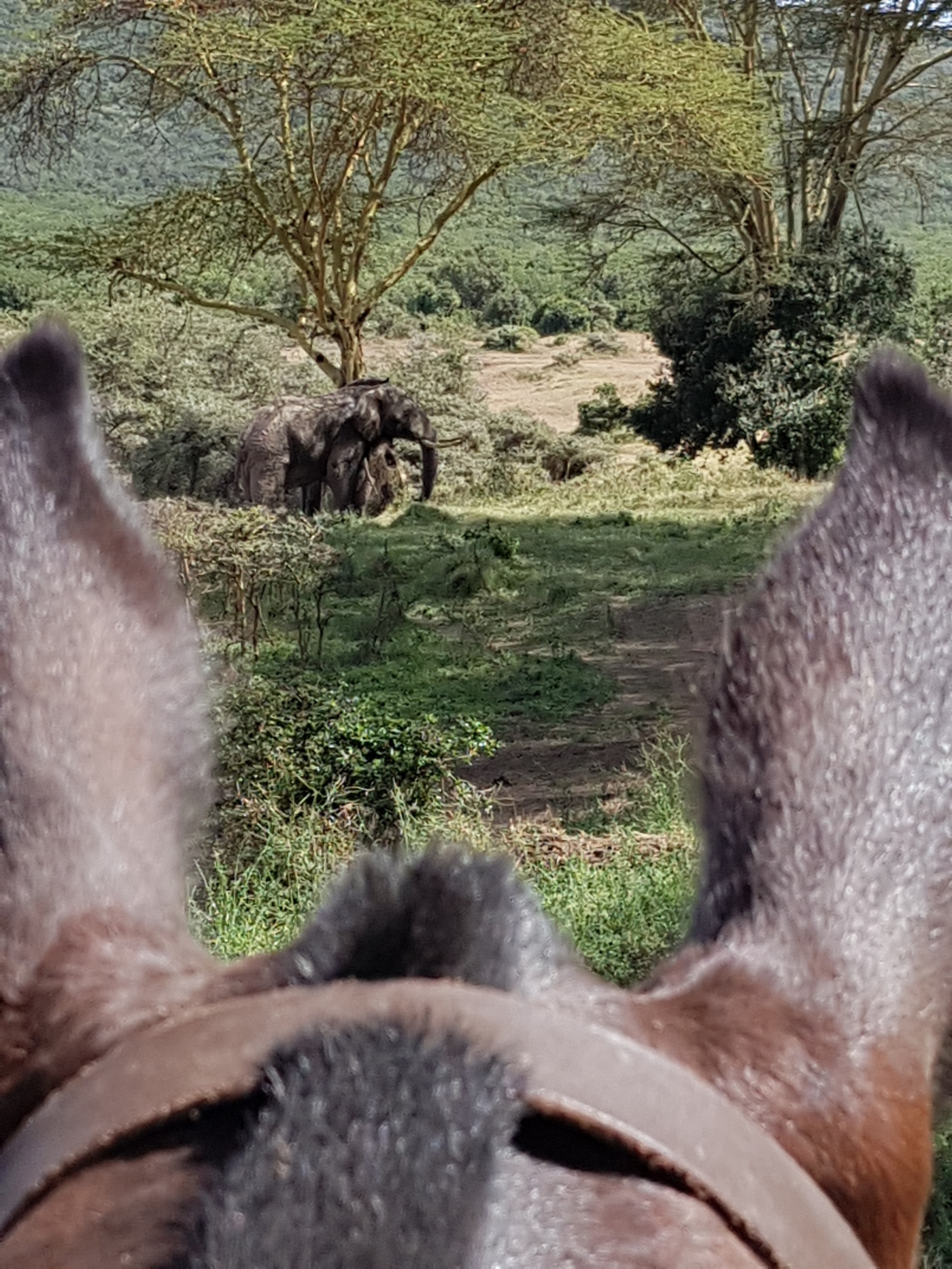 For the last couple of months, I have had the privilege of exercising safari horses at Sangare Conservancy, to keep them fit so that they can participate in horseback safaris in numerous places across Kenya with Safarisunlimited.  You may recall from a previous post that in describing my rides out into the conservancy, that whilst there is plenty of wild life that regularly crosses our path, that there were ‘no big cats.’   This has changed. I retract this statement because it has become apparent that a lion has moved into Sangare Conservancy and he has certainly made his presence felt.  You may also recall that the horses were turned out into the conservancy to graze upon the grass rich plains along side the other animals.

This has also changed.  Unfortunately, the lion attacked one of the horses and whilst he did not eat the horse, the attack proved fatal.  The horses can no longer be left to roam wild and free so as a result of this most dangerous intruder, the horses are now stabled at night and grazing has been confined to daylight hours only, in a neighbour’s small field.  The horses have therefore required more exercise to keep them stimulated and fit.

Following the arrival of this male lion, he was closely followed by another male lion and whilst they are not seen on a regular basis they can be heard roaring through the night, their tracks can be found everywhere

and they are incredibly successful hunters having left numerous carcasses of zebra, impala and even giraffe around the conservancy.

Just to unsettle things even more, the two male lions have been joined by a female!  The private conservancy that prided itself on having no big cats now has three!  This has been unnerving for all concerned and even more so for the horses who not only have had their freedom curtailed, but they lost a trusted companion in terrifying circumstances.

I have continued to exercise the horses, along side the grooms and extra care has been taken by not riding the horses through the thick and dense bush where the lions may hide out, and we ride out in a group to provide safety in numbers.

Yet another reminder to me that the wild life in Africa is so much more dangerous than that which can be found in England!  The lions are somewhat lazy and do not venture out much through the day but that’s not to say that other wild life within the conservancy does not present certain challenges… the giraffe remain skittish and ‘spook’ the horses, as does the sudden movement of a darting gazelle, but even more dangerous than the lion is the buffalo.  To come across a solitary buffalo is terrifying. That said, at least they are not carnivorous.

The horses however, are safari horses and whilst they are still flight animals, and could flee at a moment’s notice, they have grown used to the wild life and riding these horses has been a pleasure.  I come across giraffe, zebra, impala, gazelle, waterbuck and eland constantly.  I’ve even observed elephants within the conservancy.

Every ride has been filled with the exhilaration of being along side wild animals in their natural habitat, the freedom of feeling at one with nature.

The horses have now gone away on their first horseback safari of the year.  The safari starts in Lolldaiga Hills and continues through Borana Conservancy. Thereafter, the horses will go off to the Maasai Mara for more horseback safaris in the wilderness.  I will go and join them shortly, accompanied by Mr Nomad and this is one adventure that we look forward to immensely.