The entire four days of our stay at El Karama proved to be magical.  We were treated to two game drives a day, one early in the morning and one in the late afternoon going into the evening.  This gave us the maximum opportunity to glimpse the wild life whilst avoiding the searing heat of the African sun, when the animals became as inactive as we did!

We set out on each game drive with an armed driver and our trusty guide, Robinson, who proved to be incredibly knowledgeable and just as enthusiastic as we were.  His knowledge of the many bird species was second to none and his ability to spot animals that we presumed were a rock or a bush or a tree was quite astounding.

We saw many elephants on our travels, along with reticulated giraffe, impala, gazelle, zebra, warthog, buffalo, amongst other creatures.  We were lucky enough to witness drinking time for elephants and much to our amusement, saw a baby elephant chasing away impala in his excited rush to join his fellow elephants at the watering hole.

We were treated to a sighting of a Grevy’s Zebra, an endangered species, who happily mixed with the common Zebra. 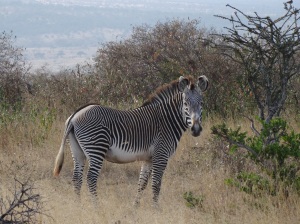 We also saw the most splendid Striped Hyena, also an endangered species.  We saw Spotted Hyena too, and we were lucky enough to observe the hyenas tucking into an Eland which had been slain earlier that day by lions.

We also saw the lions that had slaughtered the Eland and they were accompanied by numerous cubs.  On one particular night, we were able to see an entire pride of lions with their cubs.  We had first spotted a solitary lioness stalking an impala, and she was then joined by the rest of the pride.  She quickly grew bored of the impala who seemingly had a lucky escape, but to our joy, we were able to see the very many lions in their full splendour.

We were able to enjoy a bush walk whilst at El Karama.

The driver parked the truck in the middle of nowhere, we disembarked and all enjoyed a jaunt through the bush.  The driver of the truck doubled as a ranger and both he and his rifle accompanied us!  Whilst we did not run into much wild life, we did come across the tracks of a large lion.  Thankfully, he was nowhere to be seen when we were on foot.  Phil became entranced by the Cocktail Ants inhabiting the Whistling Acacia trees.  When the seed pods containing the most fearsome spikes on the tree were disturbed, the ants came swarming out as if under attack!  This symbiotic relationship between insect and tree was admittedly, fascinating.

We both agreed that our time at El Karama was magical and we did not want to leave.  The place itself was so wonderfully rustic, it was like being in a different world.  There was no hustle and bustle, no noise, no traffic, no technological trappings and just peace in a remarkably unchanged wilderness.  Being so close to the wonders of nature was amazing.  The African landscape can of course, be unforgiving with the extremes of the weather and in particular, the blistering heat but we were still left in awe at nature and life in the bush.

2 thoughts on “The Magic of El Karama”