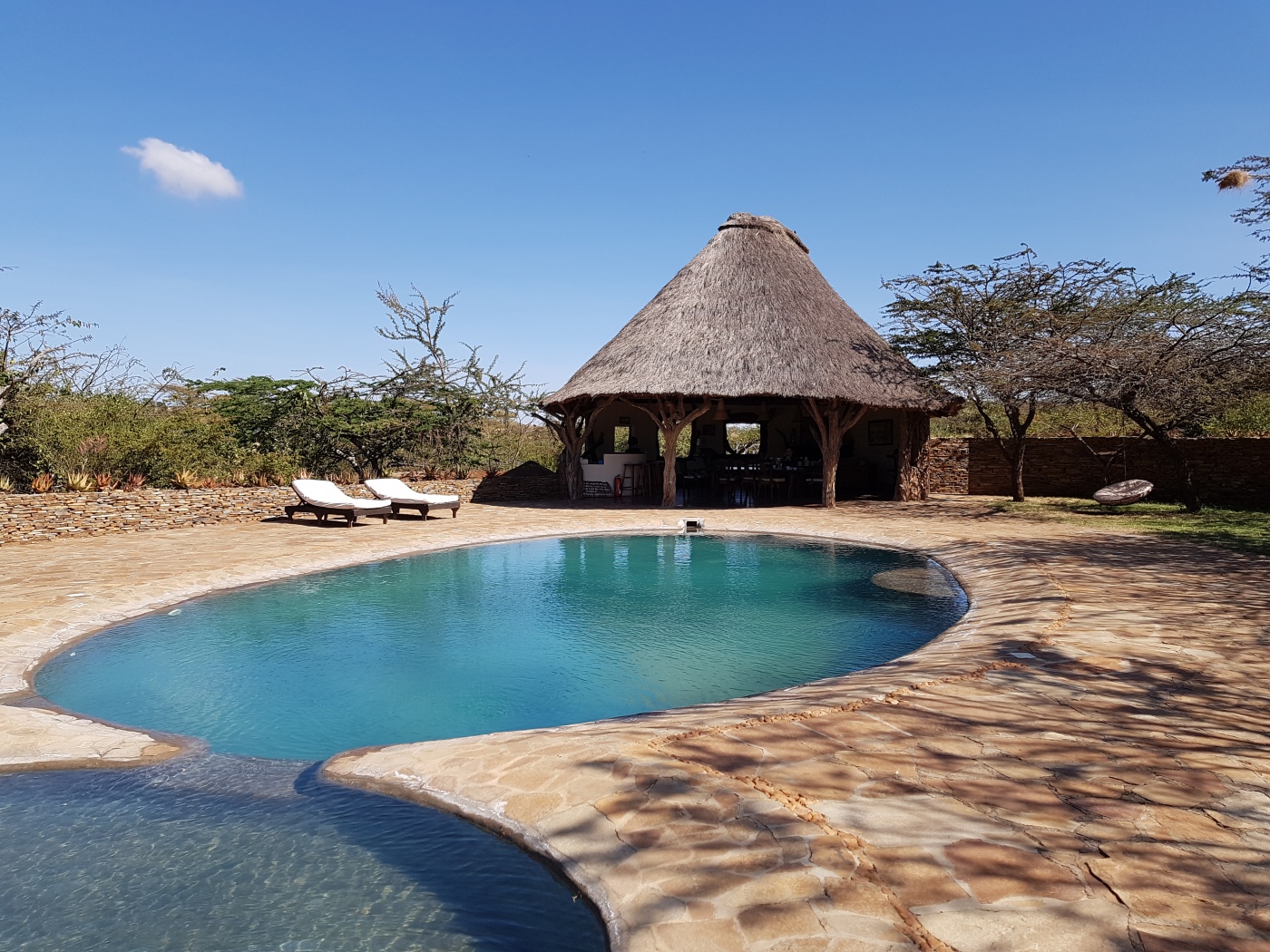 For my birthday, Phil whisked me away on a mini break to El Karama Eco Lodge, Laikipia, only an hour or so drive away from Nanyuki.  El Karama is an eco lodge set in 14,000 acres of African bush and is actually a private working cattle ranch but it is also plays host to Africa’s wonderful wild life.  Indeed, on the drive to El Karama, we saw a giraffe stood in the road, and elephants in the bush and this was even before we had got to the ranch itself. 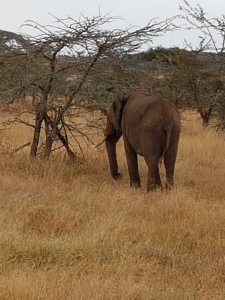 We came to realise that there were no fences to contain the animals, nor enclosures, and that this was how the wild life was meant to be – just that, wild – free to roam wherever they chose.  This only served to add to our excitement!

Upon arrival at El Karama, we had the warmest welcome and we were shown to our home for four days, a Banda close to the river.

There are a mere 8 cottages (and the most amazing Hobbit House) at El Karama so privacy and intimacy were a given.  There is a lovely pool and whilst this looked inviting, I could not be tempted to take a dip.  Phil braved it and reported that it was most refreshing and invigorating after burning in the African sun.

We were well fed with a wholesome hearty meal made from the fresh food produced at the farm on the ranch itself and we were offered a game drive.  Given the late hour of our arrival, darkness had fallen but we accepted the opportunity to go out into the bush on a night drive.  Whilst eating dinner, rustling was heard in the bushes across the river and shining a torch revealed that not even 50 metres from where we were dining was a herd of elephants who had ventured down to the river to drink!  We were informed that the wild life freely roams through the camp and it was a regular occurrence to have elephants visit the river, and to have the odd hippo on the lawn!

This place felt incredibly special from the start….

We ventured out on the night drive, accompanied by our trusty guide, Robinson, and a rather large lamp to search out the wild life.  We were provided with blankets and we settled into the ride with excitement and trepidation.  It was a matter of minutes outside the camp when we spotted some of the wild life.  We were lucky enough to see two lionesses stalking through the long grass, impala, zebra, elephants and amazingly, hippo’s!  This really was an absolute treat – to see a large Hippo out of the water and just stood in the road, staring at us!  He was incredibly shy and soon darted away but he gave away the position of other hippo’s loitering in the bush!  Phil and I could barely contain our excitement and had to be hushed by our guide!  We could not obtain photographs of this fantastic sight (because it was VERY dark) but we just knew this was the start of  a magical trip…..

#what dreams are made of

Camera trap success!
Spotty sighting!
On our drive across the Aberdare National Park (on our way to see the waterfalls) we happened across some fluffy Colobus monkeys happily chilling in a tree. We continued a little further down the road to find some Sykes monkeys living it up. It shows how diverse the habitat is within Kenya (and specifically the Aberdare range) with different species of primates setting up home within a few hundred metres of each other. The roads themselves were an adventure in themselves, crossing rivers with some gnarly bridges.
Introducing the Giant Forest Hog and the bushbuck! Whilst on safari we see warthogs quite often however, we'd never seen a Giant Forest Hog outside of a wildlife sanctuary (they love being fussed). There were so many in the Aberdare National Park that it was amazing just to watch them grazing in the abundant forest. In addition to the hogs we were lucky to see lots of Bushbuck. These shy antelope are normally difficult to find, but these guys were all over the marshland strutting their stuff, in all their beauty!
Baby faced killer. The Hyena is a strange beast. The old favorite film the 𝘓𝘪𝘰𝘯 𝘒𝘪𝘯𝘨 puts the Hyena (in these pictures the Spotted Hyena) in such a bad light as savage scavenging beasts. Although we have witnessed them hunting in all their terrifying ferocity, we have also seen them for the doting parents they are. But how cute are these babies!!!
Bird life! It was really surprising that the diverse population of bird life in Kenya is so breath taking. We recently took a visit to at @olpejeta and whilst there we were lucky to see an African Spoonbill (how cool does it's beak look!) and a Kori Bustard strutting his stuff with all his plumage, trying to attract a mate.
Whilst enjoying our stay at @thearklodge we packed up a picnic and went looking for some waterfalls. A few hours drive later, combined with a short walk through the bush, we managed to set our eye on the beautiful Chania falls and Magura falls. A breathtaking sight within the Aberdare National Park.
When you find the right place to have a nice cup of coffee! We decided to get away last minute, down the road to the @thearklodge
When you try to maintain social distance in the jungle, but the Gorillas have other ideas!