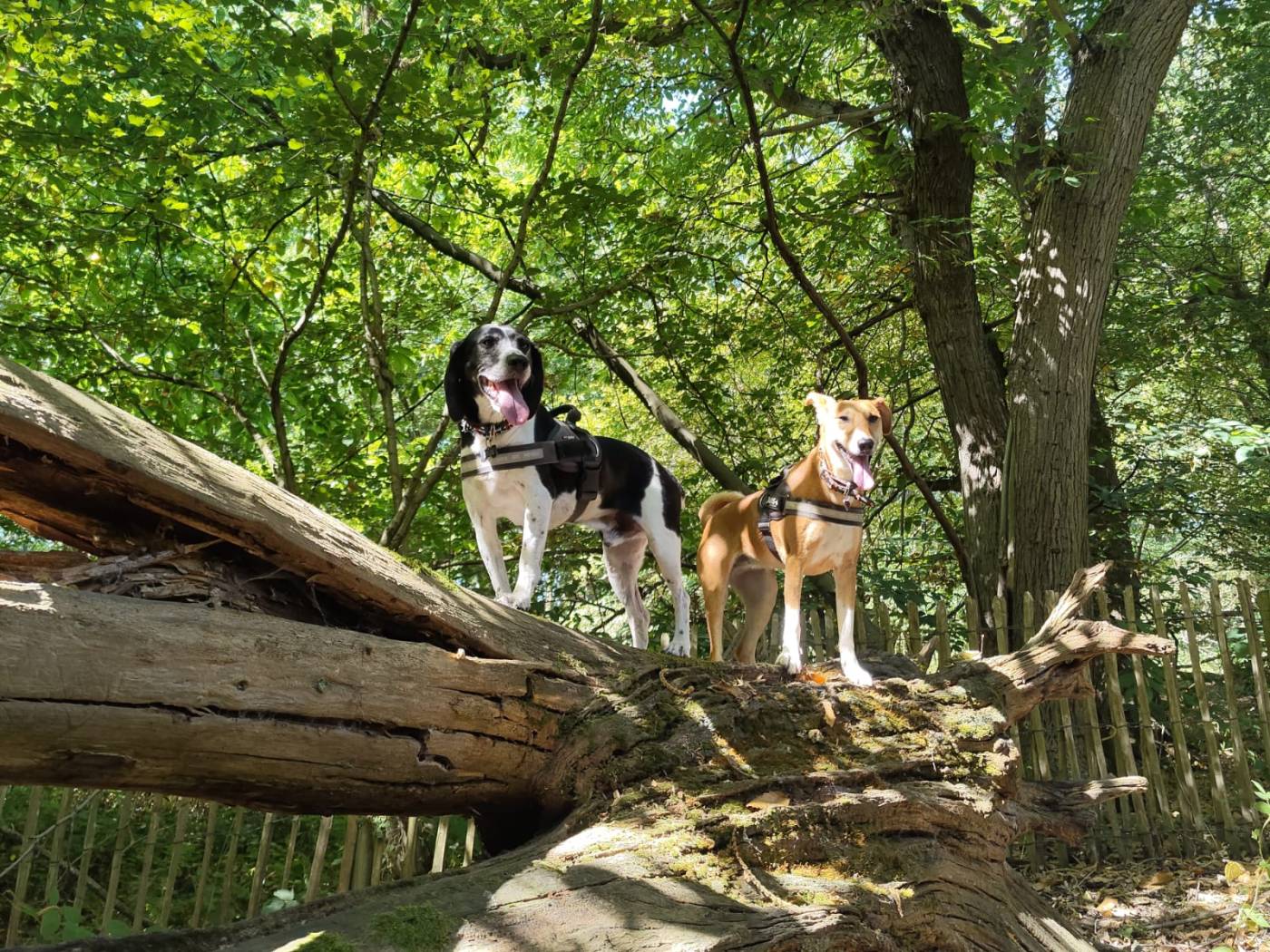 And just like that, over a year has passed since the Nomadic Family Unit changed continents and countries. This time has flashed by in the blink of an eye, and we are on the move again but this time to what Mum and Dad call our forever home.

Although it took me a while to settle into the green countryside of England with its peculiar traditions and grey climate, Solo and I have had a ball although I couldn’t quite understand the fascination with this ball and I have decided that Flyball is beneath me. Mum and Dad are convinced that I may be better suited to something called Agility because of my fondness for galloping and jumping. This is another adventure I look forward to.

Mum and Dad took me and Solo to our first dog show which was an experience. Having come from the wild streets of Kenya, parading around in an arena with other doggies was a little bewildering but I pointed my toes like the princess I am, and trotted around keeping in step with Dad and what do you know, my beauty was recognised with many rosettes! Solo won a couple too, but I am quite sure the judges preferred my lean athletic good looks over Solo’s rotund swagger.

This was only one of many adventures Mum and Dad have taken us on. I have been subjected to many a frosty morning walk which I have to admit while being somewhat chilly, has a kind of enchanting feel. Mum has tried to make me wear a coat but I’m not keen on this.

Mum has favoured walkies around a place called Gosbecks which Solo and I love. There are endless tracks and pathways through meadowy landscapes occupied by Skylarks which was all rather tempting as I do love birds, but Mum and Dad kept us firmly on leads to prevent any wandering into nesting sites.

This particular location was of great interest to Mum as it is an archaeological area where people called ‘the Romans’ built a theatre and a temple in days gone by. It was originally the site of an Iron Age royal farmstead found to the south west of Colchester but the Roman theatre was the largest in Britain and was able to seat 5000 people. The remnants of such archaic buildings are all long gone, but it is fascinating to know that we were treading where ‘the Romans’ had stood thousands of years ago.

Colchester is quoted as being the first town (now a city) and is steeped in history with many a reference to its Roman origins in street names and local pubs. It is referred to as the oldest recorded town on the basis that it had been mentioned by Pliny the Elder who died in AD 79. It occupies the site of Camulodunum, the first major city of Roman Britain and has been an important military base since the Roman era. It was also the provincial capital of Britain but was attacked and destroyed during Boudica’s rebellion in AD 61. London then became the capital of the province of Brittania. Colchester’s town walls were built in approximately AD 65-80 and they still remain to this day with Balkerne Gate being the earliest and most complete Roman gateway in the UK. On 20th May 2022, this oldest recorded town acquired city status.

During medieval times, control of Colchester Castle reverted to the Crown but in the 17th and 18th centuries, when the castle ceased to be royal, it had many other uses. During the reign of Bloody Mary (1553-1558), the castle became the centre of protestant heresy and around 19 people were burned at the stake. It became a county prison where in 1645, suspected witches were interrogated and imprisoned. In 1648, during the Second English Civil War, two Royalist leaders were executed to the rear of the castle. In the 19th and 20th centuries, part of the castle under the chapel was still used as a gaol.

Between 1920 and 1922, the castle and its beautiful grounds and parks were purchased by the Borough of Colchester and its sinister past was left right where it belongs; in the past. Mum and Dad visited a food festival in Castle Park but Solo and I were not allowed to go which is a shame because we are both partial to the odd German sausage, and the quirky cheese that the parents were laden with upon their return.

Unnervingly, when out walking across the rambling fields at Gosbecks, the deep roar of a lion could be heard in the distance, reminding me of the dangers that I had thought we had left behind on the plains in Kenya. Colchester is also famed for a zoo, whatever that may be. Over 180 different species of all creatures great and small reside here in over 60 acres of parkland and lakes with conservation at its very heart.

Although the winter months brought miserable conditions, we have had a glorious summer and there have been visits to Mersea island where there is a beach. Whilst I did enjoy the sandy beach in the land known as ‘up north,’ I did not enjoy this stonier beach as much as I thought I would, although Solo could not be kept out of the sea, much to our parents’ amusement. He couldn’t resist rolling in the sand after a swim and he smelled really bad. I found his hunting for seaweed to be slightly repulsive. I could not embrace the bitterly cold North Sea though and opted to sulk on the shore.

Mum and Dad also tried to keep us cool by producing a paddling pool in the garden, but I hated this too. Dad made me get into it despite my protests. I got my feets wet. Solo was only too happy to be lured into getting into the paddling pool as he can’t resist a tennis ball, more fool him!

However, the muddy puddles and the stagnant pond water to be found in Friday woods was epic! We have had many a happy jaunt through the woods which has enabled both me and Solo to shake off the shackles of a lead and run freely amongst the towering trees, career through the bushes and it was a delight to run in and out of the deep smelly mud and get covered in black grime! Dad hosing me down in the yard afterwards was not that delightful.

Such lazy days through the summer have been blissful, and I have also learned that Dad’s hammock is the best. Solo can’t jump high enough to get into the hammock so I get to snuggle into Dad as much as I like. Mum doesn’t enjoy the hammock so it’s me and Dad’s thing. I particularly like the fact that it rocks, although Dad doesn’t share my fondness for this.

And now we are on the move to the ‘forever home’ where I’m told the hammock probably won’t be coming out again this year as winter will soon be upon us. The weather is on the turn, the temperature starts to drop and the summer nights draw in. Mum and Dad have promised me and Solo that we will find other exciting walks to go on, but I won’t forget our time in Colchester and all it has to offer. The packing boxes have reappeared and Mum and Dad seem to be in a continuous state of turmoil, but I’m sure it will all settle again soon and we can continue the next chapter in this crazy life we lead.