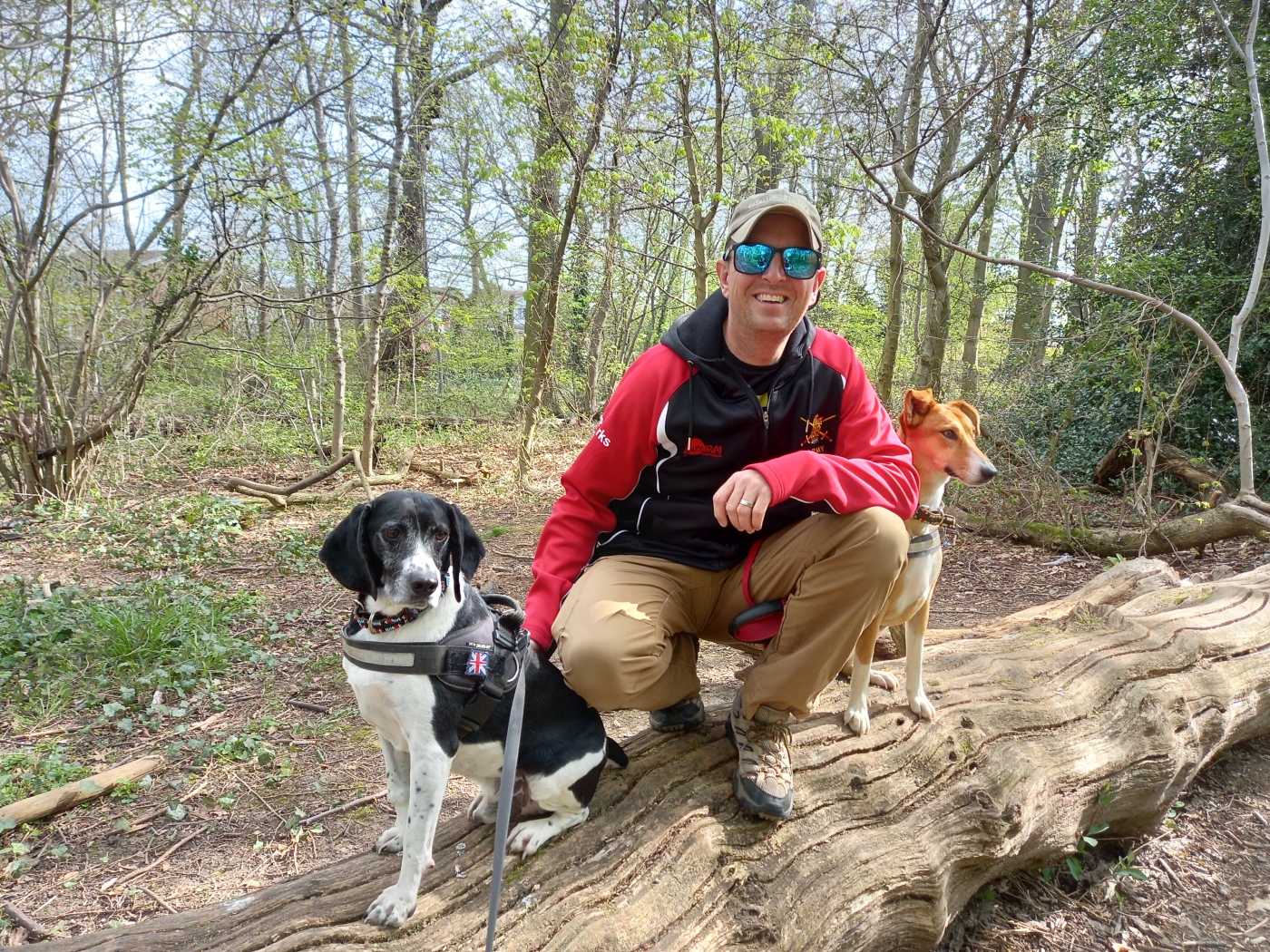 What a whirlwind couple of months it has been. There has been many developments of late in that I have travelled to a new country, to a new continent and everything is, well, different.

Mum and Dad had been behaving very strangely for a couple of weeks. The contents of the house were packed up into boxes and a wooden box, a crate, appeared in the house. Solo kept saying it was the crate of doom and although this concerned me, I carried on with my usual running around, digging and searching out birds and having a jolly old time with Twiga, my new favourite friend. A truck came and took everything away, including my bed which was odd but still, Solo and I carried on as normal.

Then Mum and Dad put me in the crate of doom and we went on a road trip to Nairobi. I was becoming increasingly perturbed by this and Solo even left me on my own to wander around the car while it was moving so I got a little upset and cried a little. Solo assured me that we would be ok and even when a stranger collected us in Nairobi, I didn’t have any idea what was happening.

Then it happened. Just as soon as we had arrived at Yappaville and I was beginning to settle into all the fun fun fun, Solo and I were bundled into our own crates and I had to fly on a big silver airplane. Yes, I was leaving Kenya on a jet plane. We were all alone and Mum and Dad were still nowhere to be seen. This was a very confusing time and I’m not sure I was happy with all the staying still in a crate, and not being able to run free, and where were Mum and Dad?

Solo and I were reunited in a place called London Heathrow which is a big noisy place with lots of things going on and lots of other doggies in crates. It was bewildering but I went with it. I was allowed out of the crate at last and Solo and I had loads of fuss so it was ok. And there was Mum and Dad!

It was rather cold but we were finally reunited as a family. There was no dust and I could breath easier but there was no searingly hot sunshine and I could see that there as so much more greenery than Kenya. It was all very bizarre. Mum and Dad informed me that I had left Kenya and I was now in a different country called England, in the United Kingdom.

This has been a monumental change in my life but I’m starting to embrace it. We travelled to a place in this strange land called ‘up North’ where we stayed in a house with Nanna. I’ve met Nanna Nomad before and it was great because she hugs me and Solo, and fusses us and gives us toast. We got new beds too, so it was great.

It was very cold though and it rains A LOT. It is not heavy rain like rainy season in Kenya but it is soft and drizzly and makes me just as wet all the same. I also experienced a thing called hailstones which I was most offended by, as not only did it make me even colder and wet, but it hurts getting hit by these small projectiles that fall from the sky.

Now I’ve learned that we’ve gone ‘down South’ so it is a different part of this weird country but thankfully, very much warmer.

The countryside is beautiful. The earth is not scorched. Everything is so much greener than Kenya and there is no dust, no red soil, no black cotton soil, and no sunshine! I love sunbathing so I wasn’t sure what to think of this introduction to this new place. But the land is lush and fertile, and pretty with flowers in abundance and there are many fields and meadows to run free and have fun in.

There are woods and forests filled with rustling leaves and rustic smells, and fallen logs make for epic climbing although this is more Solo’s forte than mine. The landscape is buzzing with a vibrant energy although the wild life here is on a much smaller scale.

Mum and Dad say that we will be safer here to walk and run freely, without fear as to what lurks in the bushes, and not be lion bait.

There are still creatures to chase and I particularly love the pesky squirrels. And birds. There are still many birds here. There are enormous sea gulls and their cawing reminds me of the fish eagles we would see in Kenya. Far too big for me to tackle but when I’m feeling braver, I might try my luck with them. I did manage to catch an unsuspecting sparrow but Mum managed to liberate it before I crunched it.

There are so many cars. Mum and Dad insist on taking me and Solo in the car a lot and there is so much tarmac, it is now pleasurable to be in the vehicle without being thrown about like a bumper car. But this level of busy makes the roads more dangerous so Mum and Dad keep tight hold of us on our leads.

There are no goats or sheep or cows in the streets. I wasn’t very fond of the goats in any event but I do miss hearing the pitter patter of their little hooves on the road. They would get squished here anyways with the amount of cars driving about.

We have had lots of walkies in random places and most recently, Mum and Dad took us to a pub. They were excited because apparently, it was the first time in a pub since the easing of this lock down thingy, and it was a good job there were some friends for us to sniff, because I wasn’t really sure of the fascination with this Pub thing. Mum and Dad said the Red Lion was a typically British pub, so we hung out with our new buddies, Pear, Tommie and Elvis and let our parents enjoy their first pint of lager in a very long time.

I saw some huge birds called Swans and Mum said we had to stay away from them because not only are they massive but Mum said they are aggressive. They were beautiful and graceful, but I kept my distance for once. I felt sure I could take them but Mum was insistent I left them alone. I was fascinated by them as they only reside in temperate countries and certainly cannot be found in my African sub-Saharan homeland.

England is a land of peculiar traditions and customs and these swans are an example of that. During the reign of Elizabeth I, they were eaten and prized for their meat but now, throughout the reign of Queen Elizabeth II, they are protected. There used to be a Royal Swanmaster whose duty it was to organise an annual ‘swan-upping’ and this tradition survives to this day. Royal Swans are no longer marked along the river Thames but they are regarded as belonging to the Queen. The Queen has prerogative over all swans in England and Wales and there is still an officially appointed Swan keeper who will dispatch such creatures all over the world as gifts from the monarch.

I look forward to learning about these quirks in this eccentric land of medieval castles and ancient monuments, of Kings and Queens, of rolling heath and moorland, industrialised concrete cities and towns; a country steeped in fascinating and unique history.

Mum and Dad have started to take me to this activity called Flyball. This is a relay event where I’m to be in a team with 3 other dogs and we gallop down a row of 4 jumps to retrieve a ball from a box, then gallop back to the start line. It is so much fun! I am only in training at the moment but I get to run really fast so its all good. Mum and Dad said if I’m a good girl, we will go away to different parts of the country to do Flyball and we can go camping in the Thunder dome. Solo doesn’t do it because he’s got a dodgy paw so he watches us and I love it!

I have had my first visit to a place called The Beach. Even Solo likes it and he has welcomed the coolness in the air whereas I am still adjusting.

This beach place was amazing! I loved the feeling of the sand between my toes and I could run and run and run and run and run… I tucked my ears into the side of my head and straightened out my Basenji tail and off I went, like a rocket, with the wind whistling past my ears as I felt the exhilaration of freedom.

It was still cold so I didn’t venture into the North Sea but Mum and Dad promised it will get warmer. I look forward to this!

This unadulterated joy made me realise that it doesn’t matter where I am, its who I’m with that makes a place special and I’m so happy that the Nomadic Family Unit have been reunited. I can’t wait to explore this strange UK land, and I just know that although its very different to my homeland, I will love it all the same, as long as we are all together.

The case of the Hound of the Baskerville's has been solved! An amazing and immersive experience last night, with fantastic acting and superbly delicious food. Elementary!
The Nomadic Family Unit exploring the English countryside. Still waiting for the sunshine we've been promised by the weatherman.
Just about recovered from an amazing weekend. It was out of this world to be able to finally meet our new Niece and Nephew Sofia and Charlie. We then topped the day off by getting to see some live music 🎵 at the @festivalofthedead Rock Orchestra (by candlelight) at @middlesbrough_townhall
Managed to beat the rainstorm and get in a round of shooting.
Excited to be out shooting the Prelim at the @cpsauk world championships. Fingers crossed the rain holds off 🤞
At the weekend we managed to visit a nearby food and drink festival. There were so many goodies, it was hard to contain ourselves. We were lucky in the weather was gorgeous so after we filled up on Bratwurst, we explored the park a little. A beautiful place with a little British wildlife!
Practice makes perfect. Although we're missing Kenya greatly, it's so nice to be able to pick up our other hobbies, which have been on hold. We've entered a few competitions over the summer, so need to get out and practice as much as possible to get our 'shooting eye' back in.
After a chaotic and emotional few weeks we've finally settled (mostly) back in the UK. The icing on the cake was getting back to a hobby we both love -#claytargetshooting .
Camera trap success!