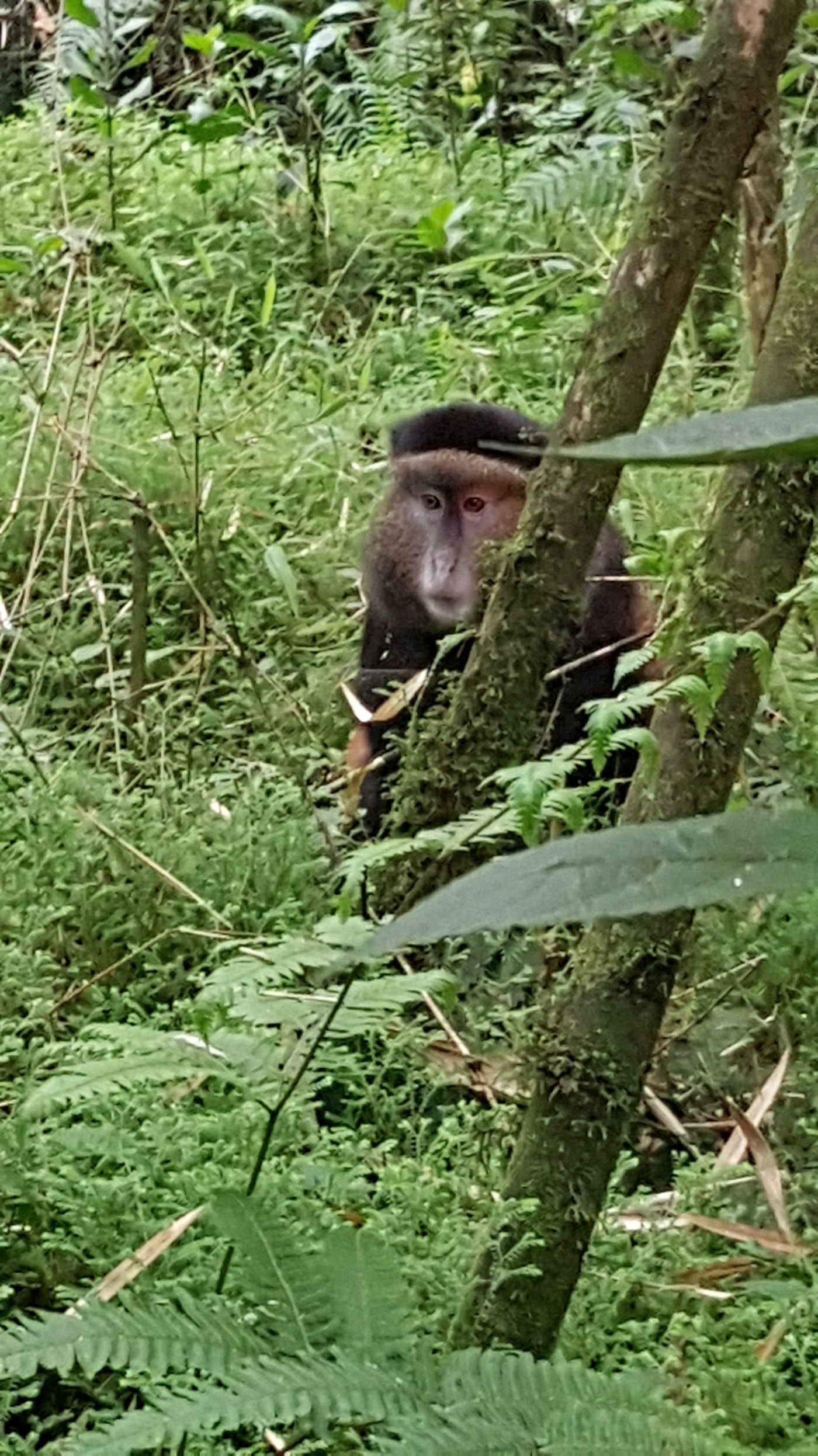 We did not wish to waste any time in Rwanda, this marvellous country, so on our penultimate day, we ventured back to the Volcanoes National Park to trek into the forest once more but this time, in the hope of seeing the Golden monkeys that inhabit the fertile foothills of Mount Sabyinyo.

Another early start allowed us to arrive at the park in good time to see the sun rising over the magnificent volcanoes that we had seen the previous day, bringing in the new day in all its glory. The mist enveloping the volcanoes did not abate at all and seemed to be a permanent feature but it did not detract from the epic scenery.

The trek to the forest was once more, over the fertile farmers fields crop-laden and bountiful in this lush and green landscape. We did not venture as far into the dense jungle as the previous day in our search for the mountain gorillas so our hike was a brisk half an hour or so to reach our destination. It was more a gentle amble through the beautiful country side which was welcome as I was slightly stiff from the previous days arduous hiking. We were accompanied by an armed ranger once more but this was precautionary, in case we stumbled upon any of the other wild animals inhabiting the forest.

Because we were on lower slopes of the mountain, it was not so humid and upon entering the forest, it was dark and damp, the canopy of the thick trees blocking out the sun light. It was still a pleasant atmosphere albeit much cooler in temperature and the altitude didn’t seem as bothersome. The hike was not so difficult and we were not battling against the foliage as we went but that’s not to say there wasn’t a copious amount of bamboo littering the forest. Whilst we did not see any elephants or antelopes, there was evidence that they had been present in this part of the forest with dung scattered round and enormous foot prints made by the world’s biggest land mammal.

Adhering to the strict Covid regulations, we still had to adorn a face mask at all times and upon entering and exiting the forest, we all had to have our foot wear sprayed with disinfectant. We were to attempt to maintain social distancing and physical contact with others was forbidden.

Once again, we had to remain quiet and not make sudden movements so as not to upset or distract the Golden monkeys and it wasn’t too long before our first sighting of these curious creatures. A large male was stealthily picking his way through the long grass on the forest floor. Up above, there were also monkeys spotted high up the tree tops, and at the higher echelons of the bamboo. That said, once we had seen one, more appeared rapidly and before we knew it, we were surrounded by what seemed like hundreds of these cute and cuddly primates. They reminded me a little of black Sykes monkeys but these monkeys had gloriously golden or a dazzling shade of burnt orange fur on their flanks and up their back, distinguishing them from any other monkey species.

They were extremely fidgety and not minded to sit patiently while we took pictures of them and they flitted around, constantly on the move, jumping through the forest, lurching from branch to branch through the tall trees, swinging on the dangling vines and the flexible bamboo but equally at home on the forest floor. They devoured the bamboo shoots as they went, hoovering up these delicate morsels. They were playful and excitable and an absolute delight to witness.

Little is known about these gorgeous primates as there have been little to no studies of them. They are ‘old world’ monkeys and found only in the Virunga volcanic mountains in central Africa. They can be found in four national parks including not just the Volcanoes National Park in Rwanda, but also Mgahinga in Uganda, Virunga and Kahuzi-Biega in the Democratic Republic of the Congo.

We were able to see many of these cheeky monkeys including a mother with a tiny baby clinging to her tummy. It was almost impossible to get a photograph of this as the mother kept that baby exceedingly close to her, guarding it and she was carefully watched over by other members of the troop in no doubt a protective bubble.

It is thought that these monkeys live in large social groups of anywhere between 30 – 80 individuals with each family unit dominated by a single male. Their diet consists mainly of bamboo, leaves and fruit but it is believed that they also munch on small insects from time to time. They are considered to be endangered solely due to human activity through the destruction of their habitat and the illegal use of snares. A grim reminder that we as humans, are the most destructive race and we are slowly but surely destroying each other and everything this glorious planet has to offer.

A stray Golden Monkey happened to wander into the territory of this family that we were observing and unfortunately, a confrontation occurred and there proceeded to follow loud screeching and screaming as the existing family challenged the stranger and sent him on his way. After the kafuffle was over and the dust settled from this territorial dispute, one could appreciate the differences between the monkey hierarchy and the mountain gorillas, the latter of whom were not so concerned over the land which they occupied. The monkeys were also much more excitable and energetic than the gorillas, not so placid or lethargic but an absolute joy to watch as they flitted about in their natural habitat.

Once more, Mr Nomad and I were in awe of these beautiful creatures which we had had the privilege of watching whilst they went about their normal business, behaving entirely normally in their own habitat. We would never get the opportunity of seeing these Golden monkeys or even, the mountain gorillas anywhere else in the world and we were humbled at how lucky we had been to glimpse such animals, particularly when their populations continue to decline in this ever changing world.

The landscape was beautiful and as we left the forest, we hiked back following a different route and we were able to take in the rustic rope bridges crossing deep ravines and gorges, the mist swathed ever-pervading volcanoes and the lush fertile soil of the farmers fields. There was a smattering of pyrethrum, vivid white daisies, breaking up the greenery making for stunning scenery and we bid our farewell to this enchanting land and its very precious occupants.