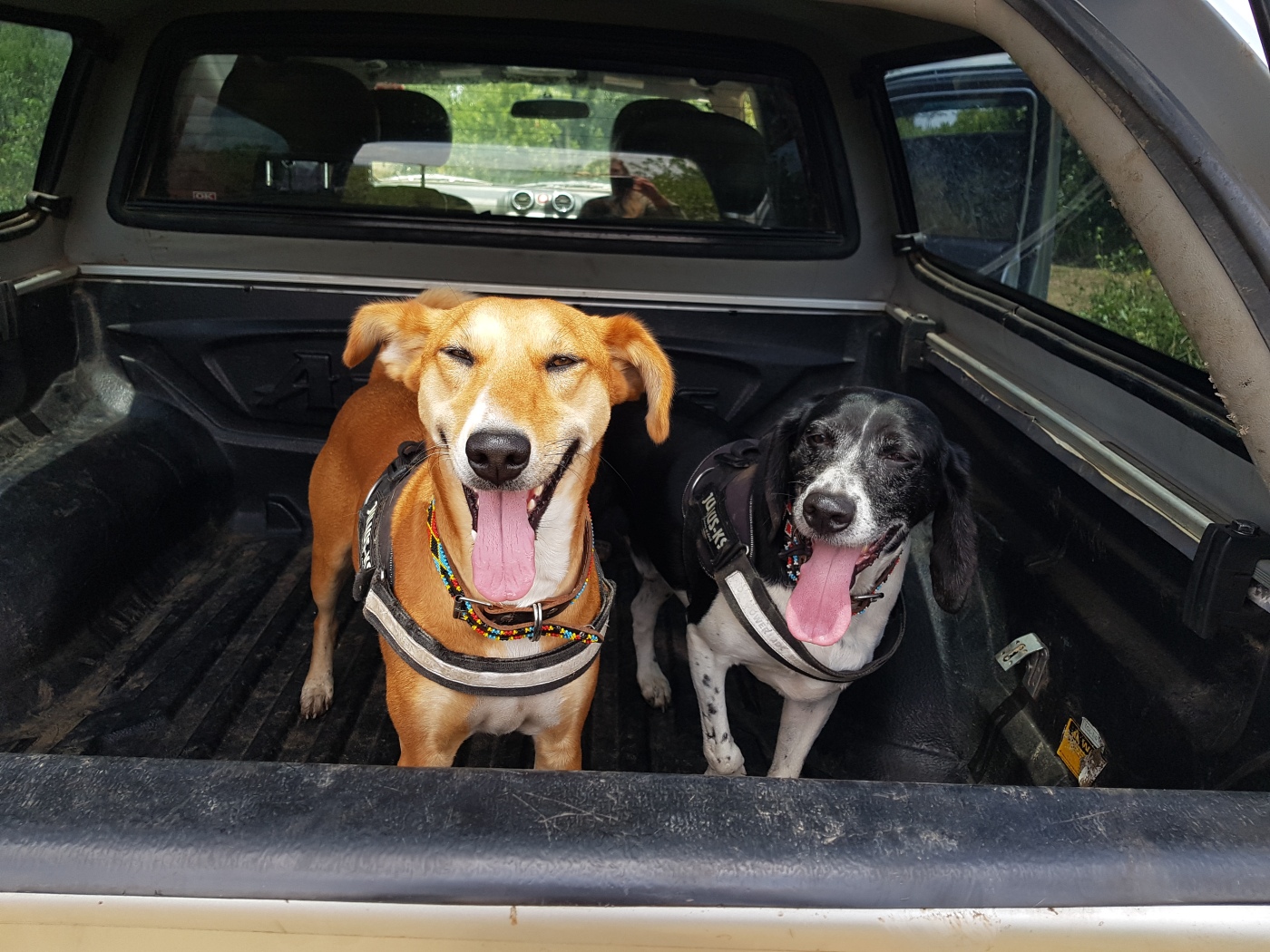 Mummy came home! I don’t know where she went but she had been gone for such a long time. Daddy had worked us to the bone, taking us into the office nearly every day but I don’t think we let him down. Hound Solo excelled in his sniffer dog duties, sometimes doubling up as a get away driver, and I have continued to maintain my fierce reputation as attack beast. I’m not sure Mum was impressed with my excited biting but I have to keep reminding her that while she was away, I had to hold the fort. I’ve been keeping check on the house and the garden and I’ve taken to supervising Benson, the gardener.

And what fun we have had since she returned! Mum and Dad took us to our friend’s place, where Mum rides the huge horses and there are new friends. Spinach has disappeared now but Mum said he has found a forever home so I’m happy for him. Any ways, Hector was around to play with and it was such fun to see him, and the others. I met a new friend, Doughnut the donkey and I’m not that keen on her but Mum and Dad seem to like her. Solo was oblivious to her presence, never letting the side down in his sniffing duties.

Mum has taken us out into the bush to go running with the horses which is fun fun fun! A new playmate has turned up in the form of a giant blood hound called Tipper. He was an anti-poaching dog at Lewa Conservancy and now he has retired. He is very big and rather smelly and some strange gunk hangs off his enormous jowls.

He is actually very timid having spent his entire life in a kennel and his manners are questionable but I have found that he is rather wary of me. He is easily tormented and I only have to give him my ‘attack beast’ look and he cowers. He’s a strange creature but Mum says I have to be nice to him because he’s very old and doesn’t have long left in this world. I even managed to pinch his bed and he didn’t complain at all although Mum made me get off it.

So after Mum being away for like, forever, Daddy has now gone away. Apparently this is for work, but I find this unsettling as he used to take me and Solo to the work thing. And now we just have Mummy. She has insisted on taking us running which is not so much fun, although a grey heron was stalking us which made for great entertainment.

Mum took us on safari to Ol Pejeta Conservancy which was fun. We have a new vehicle which has a massive boot so I had fun walking around the car while Mum drove really slowly, taking in the many sights that the landscape has to offer. We saw zebra, impala, gazelle and hundreds of buffalo. We also saw numerous warthogs sunbathing. It was scorching so most of the wild life was lying down, or seeking shade and trying to remain cool. It proved too hot for even the animals that day so we didn’t stay out long as the African sun bore down on us.

Mum calls the new car ‘the tractor’ and while it is not as speedy as Blue Thunder was, it is much more robust and we can’t feel the bumps in the road as much as we used to.

The boot lid is however, broken and every now and then, it pops open which upsets Mum no end, but it gives me and Solo a good vantage point, and lots of fresh air. I even managed to jump out one day and had a little trot around a local village unaccompanied, much to Mum’s annoyance.

Mum nearly caught a bird for me and I was very proud. It was a small brown bird which Mum says was a Speckled Mousebird which has an inordinately long tail. We were driving along and Mum had the window down when I saw the bird fly in through that window and hit her in the side of the head. This was very amusing and I fancied a nibble on that bird as it flapped around in the footwell of the car but Mum wouldn’t let me have it and carefully picked it up and put it on the side of the road. I have to say I was most disappointed but Mum said it was still alive and deserved the chance to live. I thought it looked rather tasty.

I have been a very good girl though in that I did find a dead bird on the grass verge and I scooped it up and before I had chance to chomp on it, Mum insisted I give it to her so because I have missed her, I let her have it.

When Mum goes riding, Solo and I have been going with her, to keep an eye on her. One day, she mentioned that lions had been spotted around in the bush (whatever they are) so she left me and Solo in the garden at the house to keep us safe. We didn’t understand this so decided to dig our way out and go and rescue Mum from these lions. Solo and I were very pleased with ourselves because after we dug our way out, we ran off into the African bush to try to find her.

Solo was successful in sniffing out Mummy who for some unknown reason, was most cross with us. I think she was just surprised to see us, running free in the African wilderness. Solo and I worked really well as a team to locate Mummy but she hasn’t taken us back out riding in a little while. She says we will get eaten!

I have no idea what she is talking about though as I am sworn to protect her until Daddy gets back. Solo seemed unaware of any danger and even had an opportunity to grab a drink, even though there were some rather large giraffe behind him. To say he is a sniffer dog, his eye sight is not so good. Or he’s just being brave and understands his duties to protect Mummy from all creatures while Dad is away.

I do hope Daddy is coming back soon. Mum said that he has gone to the UK place, where she was for a while and that apparently, there is this thing called Covid-19 and this is causing the world to go crazy. Daddy had to quarantine and we are ever hopeful that even with the so-called second peak approaching rapidly, that he will be able to make good his escape and get back to us to continue with the adventures and all the fun fun fun that we always have.