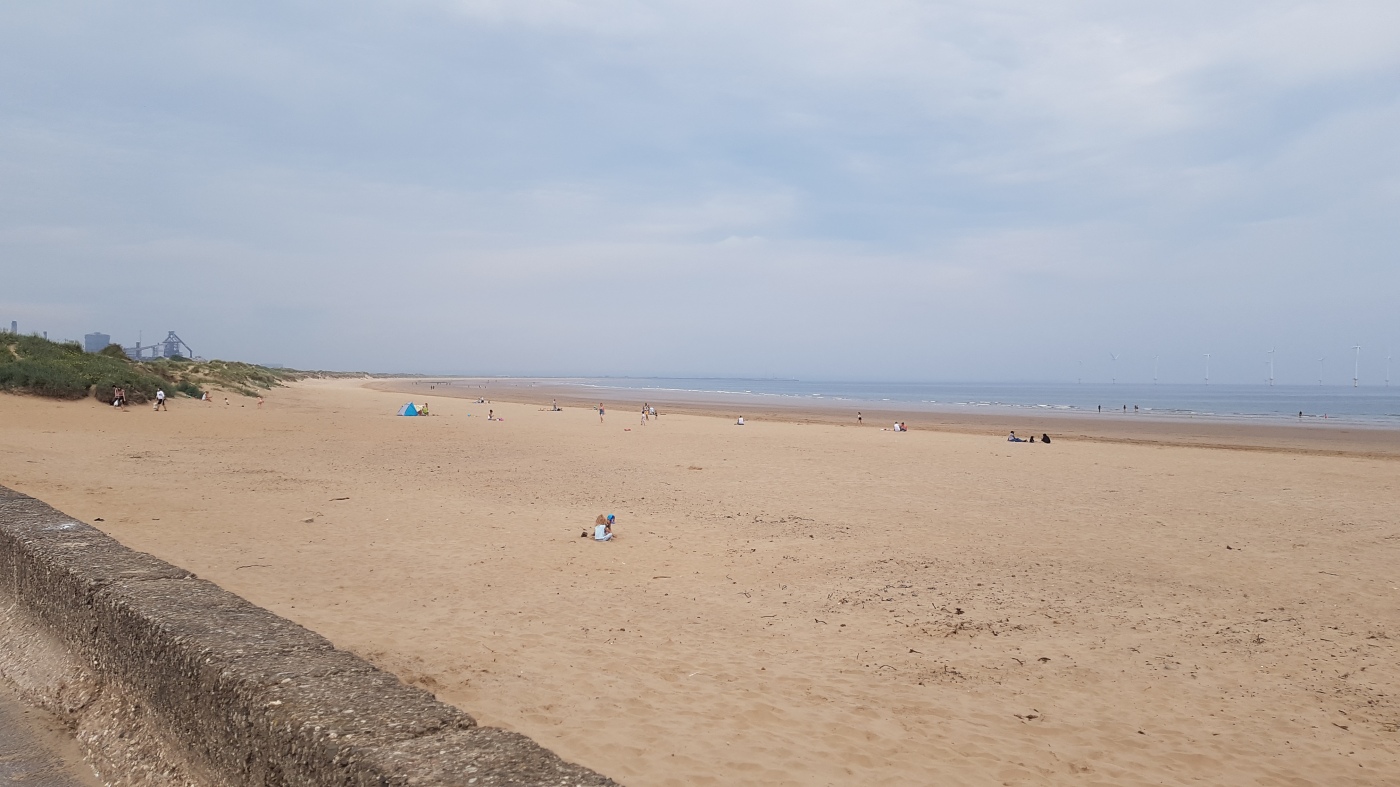 Once settled in my accommodation, I embarked upon a trip to Middlesbrough.  I was keen to visit a well known high street store selling clothes to freshen my wardrobe, and to purchase items suitable for my return to Kenya.  With the lock down easing, non-essential shops were re-opening and along with the rest of the UK, I was anxious to attain some form of normality. 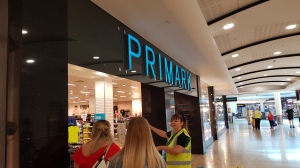 Middlesbrough is a large post-industrial town in North Yorkshire and has a population of around 138,400 but with wider urban settlements, potentially populated by around 174,700 people.  It is part of a larger built up area of Teesside.  Nanna Parks resides in a suburb of Middlesbrough, in Coulby Newham, so a visit to see her was inevitable whilst on my travels.  It had been an number of months since I had last seen her and indeed, the last time I saw her in the flesh was in Kenya.  The extended Nomadic Family Unit (Parks side) had visited in January 2020 but so much had happened since that time, including the global pandemic and the world’s landslide into lock down and of course, the evacuation of British nationals, except for Mr Nomad who unfortunately remained an essential worker and so stayed in post.

The region first became home to Viking settlers and the name ‘Mydilsburgh’ is the earliest recorded form of its name, dating from the Anglo-Saxon era c. 410-1066.  Many of the surrounding villages appear within the Doomsday Book from 1086.

In 1801, Middlesbrough was a farm with a mere 25 inhabitants but throughout the 19th century, there was a rapid growth in its population.  The region became heavily industrialised with the iron and steel industries booming and dominating the entire Tees area.  Iron production started in the 1840’s and iron stone was discovered in the Eston Hills in 1850.  Iron production turned into steel at the turn of the century and Teesside became one of the major steel centres in the country. 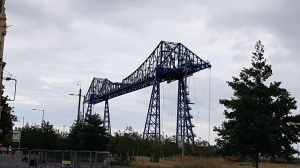 Middlesbrough is famed for the Transporter Bridge which epitomises the heavy industry in the area.  It was built in 1911 and is some 850 feet (260 metres) long and 225 feet (69 metres) high and is one of the largest of its type in the world.  It is one of only two still in working order in the country.   Also famously, the steel components of the Sydney Harbour Bridge (built in 1932) in Australia were engineered and fabricated in Middlesbrough.

There were several shipyards lining the river Tees at points in history which have over the years, vanished but nearby can be found the port of Teesport owned by PD Ports and this remains a major contributor to the economy of Middlesbrough.    Teesport is 1 mile (nearly 2 kilometres) from the North Sea and only some 4 miles (6 kilometres) from Middlesbrough and is on the river Tees.  Whilst on my shopping jaunt in the town centre, I was stalked by a pesky sea gull which was a timely reminder that this concrete conurbation  is not too far from the picturesque coast. 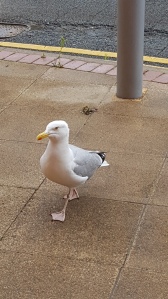 On the banks of the river Tees, the home of Middlesbrough Football Club can be found and a modern art sculpture.  “Temenos” was unveiled in 2010 in Middlehaven, designed by sculptor Anish Kapoor and designer Cecil Balmont.  It is around 110 metres in length, 50 metres high and consists of a pole, circular ring and oval ring held together by steel wire.  This is a fitting tribute to the industrial and engineering heritage of Middlesbrough which has now diminished.  It is also a reference to this industrial era that people who are local to Teesside are known as Smoggie’s! 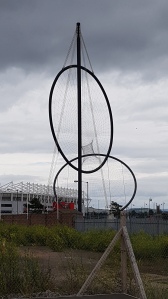 During the Second World War, Middlesbrough was the first town to be targeted because I suppose, of its industrialism, and the Luftwaffe bombed the place on 25th May 1940.

Middlesbrough is renowned for being the birthplace and early home of Captain James Cook, a British explorer who circumnavigated the world.  He was born on 27th January 1728 and following his globe trotting, he is credited with having discovered Hawaii in 1778.  A monument to him is stood on the Eston Hills or more formerly, the Cleveland Hills.  This range of hills lie on the north west edge of the North York Moors overlooking Cleveland and Teesside, rising from the Tees Valley in the north and include within it the magnificent peak of Roseberry Topping. 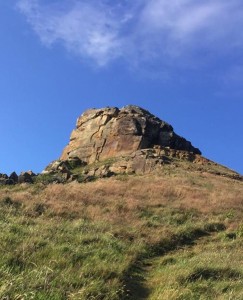 The Cleveland Hills are visually stunning and offer many walks, hikes, treks and trails to follow through the amazing countryside.  The region has been referred to as ‘Captain Cook country’ which really is a land of contrasts and contradictions, stretching from the historic port of Whitby with its ancient cliff top Abbey, moving north along miles of unspoilt and rugged coast lines to the seaside towns of Redcar, Saltburn and others, and out onto the river Tees at Middlesbrough.  The fantastic view from Roseberry Topping is second to none, and on a clear day when the mist hasn’t descended over the moors, one can see the spectacular country side which rolls out as far as the eye can see. 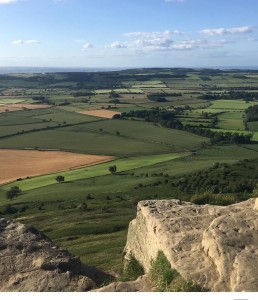 Over the years, there has been a demise of such heavy industry.  Nearby to Middlesbrough and close to Teesport, the area was home to Wilton International Industrial Site which until 1995 was largely owned by Imperial Chemical Industries (ICI) but ICI left the area in 2006.  ICI Wilton as it was known, along side Teesside Steelworks (later British Steel, then Corus, then TATA Steel, then SSI)  were major employers but unfortunately, both have abandoned the area in recent years leaving desperately high unemployment and an increase in poverty.  On 28th September 2015, the imposing steel plant was ‘mothballed’ amid poor global steel trading conditions and the ovens have since been extinguished.  Steel production in Teesside is now no more, and never to return.

ICI Wilton and the ghostly steel works can be found in the seaside town of Redcar.  Many years ago, I used to reside in Redcar so in my adventure up north, I felt the urge to go on the pilgrimage to the town in order to visit old friends.  I have never been one to dwell in urbanicity too long and have always been drawn to the country side and its treasures.  Historically part of the North Riding of Yorkshire, it is now a unitary authority of Redcar and Cleveland and lies 7.5 miles (12.1 kilometres) east of Middlesbrough on the coast of the North Sea.  There is a population of around 35,692 and it was originally a fishing town in the 14th century.  There was a massive population expansion following the discovery of iron ore in 1850 in the Eston Hills (the Cleveland Hills). 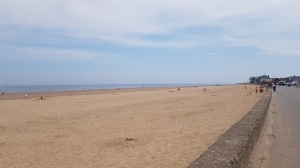 A racecourse was built in the town in 1875 but Redcar is perhaps more well known as being a seaside town which was once fairly prosperous owing to the 8 mile stretch of yellow sands stretching from South Gare to Saltburn by the Sea.  There was a pier built in 1871 but this was continuously struck by ships and fell victim to bitter storms.  It had been deliberately breached in 1940 to prevent its use by enemy invasion forces.  Thereafter, it deteriorated significantly and became so dilapidated that in 1980 and 1981, it was finally demolished.  There is now on the sea front a vertical pier around 80 feet in height, known as the Redcar Beacon which opened in 2013.  Along the high street can be found a Clock Tower which is a memorial to King Edward VII.

The beautiful beach with its glorious yellow sand and the stunning sea views were not necessarily the primary reason for my trip to Redcar.  A dear friend had offered me a ride on one of her horses and I had no hesitation in taking up this offer.  It had now been some months since I had been on the back of a horse so this escapism was very much desired and in fact, very much needed to calm my inner turmoil.  And so it was that I enjoyed the company of a gentle hairy beast known as Monty.  We were accompanied by my companion and her other trusty steed, Yorkie. 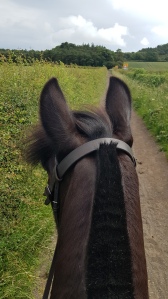 It was an honour and a privilege to experience a ride out in the beautiful British country side, taking in all aspects of the landscape including dense woods, trotting alongside lush fields and meadows teaming with vibrant plant life and wild life, while still having the delightful sea views and all in the shadows of the Cleveland Hills.  I was able to witness all of the contrasts within God’s Own Country with the spectacular natural landscape, but also with a back drop of the imposing trade marks of the industrialism with the abandoned steel works, and the expansive ICI site occupying a vast area of land, the remnants of a by gone era.

Having received a good dose of equine therapy, I set off contented at having had the opportunity to catch up with old friends and the Parks side of the Nomadic Family Unit and continued on my adventures ‘up north’.  Onwards! 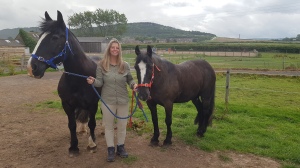