The camp was on the move again.  After an uneventful night, save for the incessant grunting of the hippo, we arose reasonably early and following a hearty breakfast, we hit the road again with another epic ride through the Maasai Mara.  The ride was to be approximately 20-25 km and we rode across Nkilenya Plain to get to our next camp within Lemek Conservancy.  This conservancy is in the Northern sector of the game reserve and is approximately 19,000 acres.  Mr Nomad accompanied the amazing guide Pete in the safari vehicle who once more, made their way slowly through the savannah to set up a site for lunch, then to proceed onwards to our new camp.

The landscape was as ever, spectacular and teaming with wild life.  As we rode, we scattered seeds to assist with our carbon footprint – a great idea by Safarisunlimited.  As an organisation that is so keen on conservation, there was also a blanket refusal to use plastic products and furthermore, if we came across any litter as we rode through the country side, the syce would dismount and collect any such rubbish as we went so as to clean up after those that had been before us.  We saw impala, gazelle, buffalo, eland, zebra, elephant, giraffe, topi, wildebeest and as appears to be usual for the Mara, a vast array of birds including the strutting Secretary bird, the glorious Grey Crested Cranes, African Fish Eagle, Tawny Eagle, and various vultures, to name but a few.

We enjoyed a long and fabulous canter over the plains alongside a large herd of eland who lumbered along side us.  The Eland are the largest of the antelope species and are awkwardly built, so their galloping along side us was with a clumsy gait, and nowhere near as graceful as our wonderful safari horses.  We enjoyed more canters across the vast plains which scattered thousands of zebra.

Although one would expect zebra not to be startled by horses because of their apparent similarities, the zebra, being a prey animal, are even more nervous than the average horse and appeared to be running for their lives as we jubilantly ran along side them.  Words cannot emphasise enough the sheer joy and elation felt when riding with such freedom, along side the animals that are truly wild and free, in a completely unspoilt landscape.

We rode towards a small copse with a gentle stream running through it where Mr Nomad and Pete had again, arrived before us and kindly set out our bush lunch.  As we wandered towards the lunch site, I saw my first snake in Africa.  It was small and light green in colour and moved with lightening speed so I was just not quick enough to take a picture.

Upon our arrival at the lunch site, again, we dismounted and tied horses to trees, fed and watered them and settled down for a couple of hours rest and relaxation before the next leg of our journey.

As we chit chatted with our new friends, with the African sun beating relentlessly down upon us, it became apparent that my horse, Rego was extremely restless and somewhat distressed, and he became poorly with suspected colic.  As any horsey person will know, this is extremely uncomfortable and painful for the horse and can be incredibly dangerous, almost life threatening.  For those non-horsey people, colic is tummy ache (with many different causes) but horses have a very complicated digestive system meaning that to alleviate any gastric distress is difficult and sometimes impossible.  Horses cannot vomit so what could appear to be minor, is actually quite dangerous.  Rego in his discomfort, kept attempting to roll which can cause untold harm so there was a battle to keep him upright, and to keep him quietly walking around in the hope that the spasmodic pain would subside.  Gordie was ever prepared and the safari vehicle that had followed us everywhere contained within it a first aid kit both for horses and humans and medicine was quickly administered to Rego.  There was little we could do except wait for the medicine to work its magic and keep our fingers crossed that the pain would disperse and disappear as quickly as it had come on.  After all, we were in the middle of the wilderness with no immediate access to a vet, with the nearest form of civilisation many many miles away.  Most of us took a turn to walk with Rego until he calmed but I’m sure I speak for all of my comrades when I say that we all felt rather helpless and very concerned for the horse.  Thankfully, within around an hour, the medicine did work and Rego calmed and his discomfort waned.  The view was taken that it would be unfair to ride him when he was not feeling well, so he was led in hand by James on a very slow and steady march to our next camp.  I jumped into the safari vehicle and completed the next leg of the journey with the guys.

The view of the Maasai Mara from the vehicle was just as fantastic as being on horseback.  On our journey to the next camp, we saw a big black maned male lion lying in the grass but he looked a little battle weary, with scars and scabs on his face. We also saw a beautiful black backed jackal, and a mongoose, as well as the abundance of the hooved creatures scattered across the landscape.

The terrain was different to previous camps.  The first camp known as KO8 was nestled in a picturesque valley, and the land was undulating and the second camp was on the banks of the mighty Mara river, but the terrain in Lemek Conservancy was changing into vast rolling plains with animals dotted across those plains as far as the eye could see, and the odd cluster of trees scattered around although not enough to offer shelter and shade from the blistering African sun.

Upon our arrival at our new camp at Nkilenya in Lemek Conservancy, much to my relief, Rego appeared to be recovered.  His food was to be rationed however, and he was to kept under 24 hour supervision to ensure he didn’t relapse.  It was immediately decided that he was to be rested and I was allocated another horse to ride from thereon after.  I was to ride the noble horse Geronimo.

The following day’s ride on Geronimo, a 15.2hh liver chestnut horse, was as magnificent as every other day.  He was a high spirited horse and we had a wonderful ride over the savannah with some marvellous cantering amongst the wild life.

We happened upon a school bus in the middle of the plains and we stopped the horses close to the bus so that we could say hello to the school children.  This was the only other vehicle we had seen for days, and as it was bright yellow, it could not be missed.  Gordie explained to us that the children had probably never seen a horse before so it was such a rewarding experience to interact with the children who were excited to be able to touch and stroke the horses.  We went on our way, waving off the ecstatic children and around mid-morning, we were treated to Bloody Mary’s!  A safari vehicle had been driven up out onto the plains to meet us and we were served the delicious drink whilst taking a quick break.  This was such a lovely surprise and it was very much appreciated! 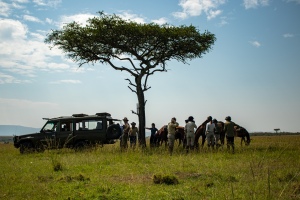 The afternoon ride was more sedate than the morning ride but a leisurely amble allowed us to get very close to some giraffe!  We were practically riding along side them which was a surreal experience.

We also got to see hyena and whilst they have a fearsome reputation, they are one of my favourite creatures.  We were lucky enough to see three female elephants who Gordie knew and he explained to us that it was a mother with her two children albeit from two different generations.  They were nervous and flighty elephants, as one of the immature elephants was incredibly young so we kept our distance.  It was awe inspiring to be any where near them!

Mr Nomad had been driving quite close to the horses and had seen much of the same wild life but he was able to get a bit closer to it than us on the horses, mainly because horses are also nervous and flighty animals and whilst we didn’t wish to upset the wild life with our presence, we also didn’t want to upset the horses and get ditched in such an unpredictable and dangerous place! 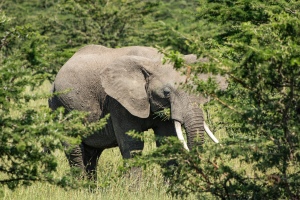 Mr Nomad did inform me that he may have got too close to a rather large bull elephant that we had all seen on our travels but us riders had kept away from him, and whilst Phil lived to tell the tale, he hasn’t showed me the photographic evidence of any such misdemeanour (yet).

On the final morning, Mr Nomad and Pete had seen a fantastic amount of lions, all lazing around presumably after a busy night feasting on the treats within the Mara.  There was clearly a high density of big cats and other than the big black maned lion who had obviously been involved in some sort of tussle, they all appear to be healthy, fit creatures who are clearly thriving in this difficult yet wonderful eco system.

Our last ride on the horses was a lovely amble through the epic country side admiring for the last time the abundance of wild life and bird life, wishing that time would stand still.  The presence of zebra in the camp upon our return made for contented smiles all round, with an appreciation of just how close we were to the wild life.  We also learned from the crew members that through the night, hyena had to be chased out of the camp! We really could not have been much closer!

Our final night in camp had been spent huddled around the camp fire, regaling stories of our experiences in the magical Mara, marvelling in the wild life that we had seen, and never wanting it to end.

But the end did come to this most wonderful adventure.  We had had the best rides on the best horses through what I consider to be one of the best places on earth and there was nothing that could ever compare to it.

We had met amazing people with the other riders that had joined us, the Safarisunlimited team and the crew members that had all made this experience life changing.  Phil and I agreed that this had been unforgettable, more than memorable, the trip of a life time and quite simply, a dream come true.