After the glorious weather on day one and day two, it was disappointing to wake up on day three to rain.  It had rained heavily through the night and not much sleep was had, so it took me a while to bring myself round in preparation for the day ahead.  That said, the camp cook, Davis, duly served us the trusted porridge to ready us for the arduous climb to follow.  This was to be the hardest day yet, with an estimated 8 hours of trekking to ascend to approximately 4,200 metres, although coming back down to 3,900 metres or thereabouts to the camp site.

We left the beautiful Lake Ellis and sauntered along the alpine terrain.

The landscape was as ever, stunning and wild and the views made the day better.  We crossed the Nithi river and continued in the gradual ascent but unfortunately, the rain continued with us and went from a steady drizzle to an unrelenting down pour. 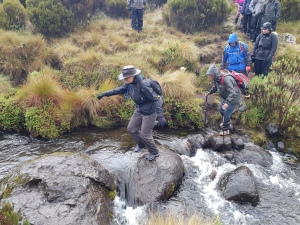 Along with the rain came the fog.

The fog gradually seeped in, eerily drifting across our view point and those stunning landscapes disappeared from sight.  As we trudged along in the gloom, we were rapidly over taken by the porters who were like machines!

They were carrying all of our belongings in Bergen’s (Back packs) along with the tents for camping, the toilet tent, the kitchen tent, the food and water, the stove, the communal tee pee, their own belongings and the altitude seemed to have no effect on them whatsoever.  Some of the porters wore jeans and trainers yet none of this bothered them as they stormed past us.  One of these chaps wore his welly boots to climb in, and one of the porters had no laces in his shoes!  Phil and I were in awe of them, and grateful that we had them to assist us on this expedition.

As the day wore on, we got wetter and wetter and our mood was dampened somewhat, but we eventually came to the top of a very steep cliff which whilst shrouded in fog and mist, we were actually able to see down into the spectacular Gorges Valley and what a sight it was! 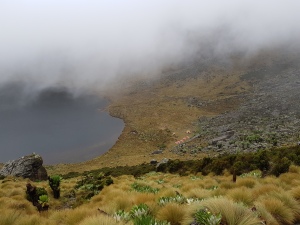 Despite the pervasive conditions, we could see down into the vast valley and Phil and I were blown away by the sight of Lake Michaelson nestled serenely at the bottom of the valley.  This truly was a magnificent sight to behold and really had made the arduous trek well worth it.  The only difficulty was that our camp had been set up in the bottom of the valley itself, at the side of Lake Michaelson, and getting to this camp would prove to be particularly perilous.  The cliffs were unbelievably steep and there were times when I was almost shuffling down on my bottom.

In fact, I did have a fall after loosing my footing and as I slammed down onto a rock or it could have been a tree stump, (either way, painful!) I started to tip over the edge but thankfully, Phil lunged forward and grabbed my back pack, hauling me back up which I am quite sure saved me from tumbling down the mountain side face first! This near miss with death took my breath away for a minute but we carried on and after treading extremely carefully, we got to the bottom of the cliffs and took a minute to take in the surroundings.

It was truly breath taking (as was the altitude!) and I felt privileged to be able to see this, even though it had been incredibly difficult to reach this point. Thankfully, the camp had already been set up and our tents however small, were a comforting sight.

Phil had the brain wave of setting up a washing line in the tee pee so we changed, and hung up our sodden clothing in the tee pee to dry out and we spent the evening huddled around the stove to warm up.  The camp cook made us a wonderful dinner and followed this up with a morale boosting cake, for which everybody was grateful! It was decided by our guide that the coming day, that being day four, would be the day to summit the mountain. 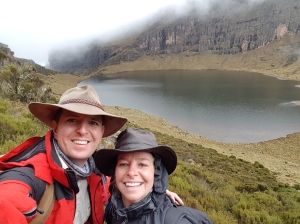 This would entail trekking from our camp at 3900 metres, straight up to the summit at 4985 metres, and then from there, descend quickly down to our next camp at Shiptons Camp at 4200 metres.   This was slightly ahead of our original schedule but nonetheless, incredibly exciting and there was certainly much trepidation from Phil and I as we retired to our tent early to attempt to get some sleep and well needed rest.

We needed as much mental and physical strength as we could muster for the following day…..

It was great to finally dust the guns off again. Mrs Nomad on fire 🔥 and smashing clays for days!
A great day out at the High Easter Point to Point race. It was lovely to see these events going ahead again with so many people turning out to support it.
After the Golden Circle tour, we managed to get ourselves up to the still active Fagradalsfjall volcano.
First adventure of 2022!! Mrs Nomad whisked me away to the land of ice and fire 🔥 to get over the fact I turned old.
Merry Christmas and a Happy new year from the Nomadic Family Unit. Hoping you have a safe and healthy 2022.
The Great Christmas Feast.
Next adventure...booked!! Whoop Whoop!! After getting a taste for Rafting last year, it would be rude not to!
Finally managed to get some photos sorted from our recent trip to Cyprus.
The case of the Hound of the Baskerville's has been solved! An amazing and immersive experience last night, with fantastic acting and superbly delicious food. Elementary!