In Kenya’s Laikipia Plateau, at the foothills of Mount Kenya, lies Ol Pejeta Conservancy.  90,000 acres of glorious open savannah grassland which is the largest black Rhinoceros sanctuary in East Africa.  Ol Pejeta exists for the conservation of natural habitat to ensure protection of the existing rhino, elephant, giraffe, zebra, big cats and other wild life populations, as well as housing a 300 acre sanctuary for chimpanzee’s.

Going on safari within Ol Pejeta was an amazing experience.  We entered early in the morning and spent around 12 hours observing the amazing wild life that Africa has to offer, including many endangered species.  Phil had to be reeled in on more than one occasion whilst he was hanging out of the car window, and standing up through the open sun roof, trying to get those perfect nature pictures.

Whilst Ol Pejeta has some of the highest predator densities in Kenya, with 6 resident prides of lions, cheetahs, leopards, hyena, black backed jackal, caracal and bat eared fox, we saw only one lion on this day, and two hyena’s.  It was through patient tracking and stalking through the long grass in the car that we managed to glimpse the solitary lioness.  We were convinced her mate was around after we thought we heard the deep roar of a male lion but this turned out to be a prank from the car behind us!  (Thanks youtube!) I’m sure next time we will spot more lions. We caught but a glimpse of a jackal with its big ears poking up out of the grass!

Ol Pejeta is perhaps more well known for being a Rhino sanctuary.  Indeed, the last male Northern White Rhino, Sudan, who died on 19th March 2018, lived in Ol Pejeta and the last two remaining female Northern White Rhino in the entire world live here.  They are considered to be extinct in the wild, their populations decimated by poaching and civil war.  Ol Pejeta has a Rhino cemetery to honour the lives of the Rhino that had roamed freely at Ol Pejeta but have met their demise through poaching, or in two cases only, natural causes.  It is truly heart breaking to realise that the extinction of these magnificent beasts could be imminent, and it is a privilege to be able to see them in their natural habitat. 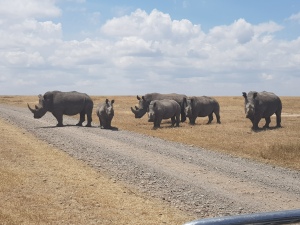 Ol Pejeta have taken significant steps to protect these animals but poaching is rife.  They also care for a black Rhino named Baraka who has lost his sight.  He loved his ears being fussed!

It was with true awe and wonderment that we were able to see such beautiful creatures adorn the savannah grasslands and as we travelled along, we saw zebra, buffalo, impala, waterbuck, and giraffe to name but a few.   There were hundreds of buffalo gathering round one of the man made watering holes, although they soon thundered off having been disturbed by our car.

We saw a couple of solitary hyena’s but on this day, we were not quite so lucky to see the hyena cubs which we had been told were around.

We had a flying visit to the chimpanzee sanctuary but we saw only one chimp – Max – who looked decidedly grumpy.

There is clearly so much to see and we will never get bored with such stunning scenery and amazing wild life on our door step.